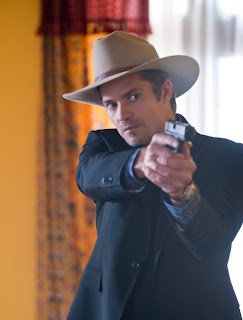 ” would be coming back for a second season, few television critics were surprised. With its all-star cast, including Walton Goggins, Nick Searcy and Timothy Olyphant, “Justified

” is bringing its own version of southern charm to the small screen.

In a recent interview, Graham Yost, creator of the series, told me how the title for the show came about. After suggesting the idea of holding a contest and offering $1,000 to the person who came up with the winning title, Yost explained that he’s not sure who came up with the final idea. The show’s original title might have been “Lawman,” however after the A&E reality show “Steven Segal: Lawman” went into production, creators of the FX drama believed it would have created “confusion.”

“Someone at FX came up with ‘Justified

’ because it was used as a line in the pilot.” Yost said, “My rationalization…of why I came on board for it goes back to one of my favorite Sam Peckinpah films, which is ‘Ride the High Country.’ And I think it’s Joel McCrea who says, ‘A man wants to enter his father’s home justified.’”

As executive producer, Yost, who wrote the screenplay for the movie “Speed

,” starring Sandra Bullock and Keanu Reeves, admits that he loves the title now, especially as the show “grows into it.” But at first, not everyone liked “Justified

.” The network had a similar struggle with another well-known series, “The Shield

.” According to Yost, some people at the network “hated” the title, but now there is no question that “‘The Shield

,” the title has a lot to do with the underlying themes of the series. Are Raylan’s shootings justified? Does Boyde Crowder deserve forgiveness, and has he paid his debt to society now that he has made a religious transformation? Where is the line between right and wrong and is it a line that can be crossed with good intentions?

“I just like that notion of that,” Yost said, “we’re doing the best we can in this life, and we want to enter our father’s home justified…. At the end of the day, we want to have lived a just life. And so that appealed to me.”

For author Elmore Leonard, whose popular novels have been adapted into movies like “Get Shorty

,” the character of Raylan Givens (who appeared in Leonard’s short story “Fire in the Hole”), is his favorite.

“I think ‘Justified’ to – of course to Raylan, means he drew first,” Leonard told me. “And that’s the way he is.”

Leonard’s affection for Raylan’s character is evident in the way he talks about the show and actor Timothy Olyphant, who plays the role.

“Raylan’s perfect because there are not many actors who have delivered the lines the way I heard them when I was writing it, when I was writing Raylan’s lines,” Leonard said. “And before this – well, there are some that have been awful. George Clooney was close, you know, and Tarantino was faithful. But there was the guy that goes way back who was in ‘Have Gun – Will Travel,’ Richard Boone. Richard Boone was in two movies of mine, and … every word he said was the way I heard it when I wrote it.”

For its freshman season, “Justified

” is certainly ahead of the curve both in the way it is written and in its unique southern flavor. On June 8, the season finale will air at 10 p.m. on FX. Click here to buy