There’s a new band ready to lead the rush-hour drive home for modern rock stations around the country. Imported from Canada, Social Code doesn’t pull any punches on their new album, “He Said, She Said” (released in the U.S. in October 2008). With memorable lines like, “I was never good enough, I was never gonna make it,” the title track tells a story that just about everyone can relate to. In fact, “He Said, She Said” is one of the best rock songs of the year. 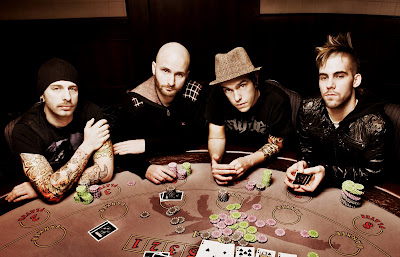 Social Code is Travis Nesbitt (vocals), Ben Shillabeer (drums),
Morgan Gies (guitar), and Logan Jacobs (bass).
Overall, Social Code’s new EP combines solid lyrics with a mix of powerful vocals that resonate at full blast on the car stereo. Like Greenday’s frontman Billie Joe Armstrong, Social Code’s lead singer Travis Nesbitt has the vocal ability to turn a song like “Beautiful” from an energy-driven “Boulevard of Broken Dreams” sounding song into a pop-radio friendly version, perfect for a movie or television soundtrack. Don’t miss the opportunity to download their songs before any of your friends.

Tracks on the new album include:

1. He Said, She Said * (Top Choice for STAYFAMOUS.NET “Favorite Song” on the Album)
2. Perfect Grave
3. The Shortest Line
4. Beautiful * (Must listen to song)
5. Everyday Late November

To listen to “He Said, She Said,” visit www.socialcodemusic.com or go to myspace.com/socialcode and add them as a friend.