“Sleepwalking” is an awkwardly tender film that explores the bonds of family love and true devotion.

Nick Stahl delivers a standout performance as James, an uncle who tries, despite his own financial shortcomings, to care for his abandoned niece Tara (played by AnnaSophia Robb). 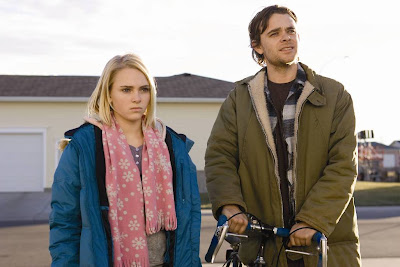 AnnaSophia Robb and Nick Stahl star in Overture Films’ SLEEPWALKING.
Photo by Kerry Hayes©2008 Ferris Entertainment, LLC. All rights reserved.
AnnaSophia Robb once again demonstrates her incredible range as an actress, in one of her best performances to date. Her comedic timing, ability to deliver dramatic lines without rushing them, and to confidently take the lead in a scene, is setting her apart from her peers.

As one of the film’s producers and stars, Oscar-Winner Charlize Theron demonstrates her behind-the-scenes talent to create an exceptional film. However, her brief part as Joleen (Tara’s mother) is perhaps one of her most unconvincing attempts to portray a character’s damaged and wounded soul. (It may just be that she has become too glamorous in “real life” to be believable in the role.)

Although the script takes the easy way out by avoiding the likely ending, it still manages to let the audience believe that the characters will one day find healing and forgiveness.

Directed by William Maher, “Sleepwalking” proves that sometimes love can awaken you from a life of meaningless wandering, to provide lasting meaning and hope.

“Sleepwalking” is now available on DVD.