At age 16, Miranda Cosgrove is already a successful actress, spokesperson and recording artist. As the star of the popular Nickelodeon television show “iCarly

,” she recently presented the “Big Help” award along with Keke Palmer to First Lady Michelle Obama at the 23rd Annual Kids’ Choice Awards. 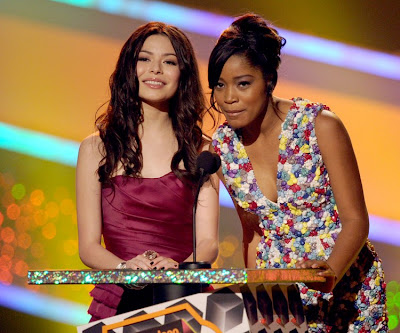 With her catchy single “Kissin U

” is set to be released April 27 on Columbia Records. Cosgrove is also scheduled to appear in Universal Pictures and Illumination Entertainment’s inaugural 3-D animated feature film “Despicable Me 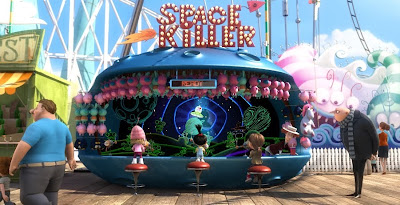 From left, Edith (voiced by Dana Gaier), Agnes (voiced by Elsie Fisher)
and Margo (voiced by Miranda Cosgrove) play a game of Space Killer
while Gru (voiced by Steve Carell) looks on in “Despicable Me.”
Photo © 2009 Universal Studios. All rights reserved.
When I recently asked Cosgrove about her charity work in a Facebook video Web chat hosted by Tiffany Smith, she talked about her support for St. Jude Children’s Research Hospital in Memphis, Tennesee.

“I’ve actually done a lot of stuff with St. Jude’s,” Cosgrove said. “And that’s been really fun because I got to go Memphis to meet a ton of teenagers and kids, and also they’ve had kids come to the set to visit.”

“We do these things called run-throughs,” Cosgrove explained. “We’ll just go through the whole episode like a play and all the kids get to come and watch. That’s been a lot of fun.”
Despite her busy taping schedule and the challenging process of working on her new album, she still manages to find time to volunteer for a good cause.

According to Jessica Lukens, Senior Specialist, Public Relations for ALSAC/St. Jude Children’s Research Hospital, Cosgrove has visited the facility twice, “once with the Power of Youth Ambassadors and once for a Math-A-Thon related opportunity.”

For the 2010-2011 school year, she is the spokesperson for Math-A-Thon, a fundraising program that encourages students in grades K-8 to improve their math skills while raising money for the hospital.

Honored for her charity work at Variety’s Power of Youth 2009 event, Cosgrove has taken on a new cause this year, supporting The After School Alliance as they team up with Quaker Chewy – After School Rocks. The organization’s mission is to “ensure that all children have access to affordable, quality afterschool programs.”

In her work as an actress, singer, and spokesperson it is refreshing to see a young star like Miranda Cosgrove helping to make the world a better place through her charitable endeavors.

For more information on Miranda Cosgrove visit her official Web site at http://www.mirandacosgroveofficial.com/. To find out about how you can help support the programs and services of St. Jude Children’s Research Hospital go to http://www.stjude.org/. Details about The Afterschool Alliance can be found at http://www.afterschoolalliance.org/.