Syracuse, NY – As she stepped out of the limousine and onto the red carpet at the Palace Theater, her delightful smile and carefree twirl, showing off her stylish heals, were sure signs that German actress Lotte Flack (who is from Hamburg) was glad to be in America. It may not have been the warm, tropical beauty of the Florida coast, but for her coming to United States was something she had always wanted to do.

On April 2, her film “Pope Joan,” which was directed by Sonke Wortmann and also stars Johanna Wokalek, John Goodman (“Roseanne”), David Wenham (“Lord of the Rings”), and Iain Glen (“Resident Evil”) premiered in front of a sell-out crowd. The author, Donna Woolfolk Cross, a Central New York native was also in attendance, as well as Barbara Rosenblat, the voice artist on the “Pope Joan” audio book. The two-day event was part of a fundraiser for the Matilda Joslyn Gage Foundation.

I caught up with Lotte, who plays young Joan in the film, at the movie’s local premiere. From her genuine charisma to her charming British accent, there’s no doubt American audiences will appreciate not only her exceptional talent on screen, but also her enchanting personality off screen as well.

Michael Aaron Gallagher: “Is this your first time coming to Syracuse?”

Lotte Flack:  “It’s my first time coming to America. I’m so excited. It’s so great. I’ve wanted to come all my life. It’s one of my dreams in life to go to America, and Donna invited me and I’m so thankful… I definitely have to go to New York City and see the other coast too. I’ll be coming back plenty of times.”

Michael Aaron Gallagher: “How did you get the role?”

Lotte Flack: “Just regular casting. But I have a funny story to tell about that. They do recalls – so when they have a larger group of people that they are considering for a certain role, then they narrow it down to a smaller group and cast those again to see… who fits the part the best. And actually my recall was on the side of the Audubon in a forest because we were meeting up because I was very late because I was shooting that day for another thing and we were meeting somewhere in the middle, in the forest and they just took some pictures and then the next day they called me and told me I had the role.”

Michael Aaron Gallagher: “Why did you decide to do this movie.” 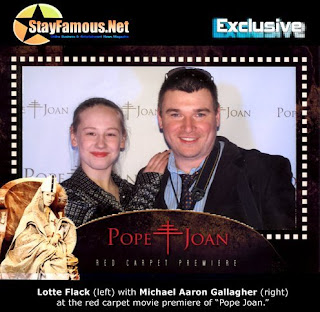 Lotte Flack: “I had never done cinema before. That was very interesting for me. Also, I thought it was a really, really powerful story. And I just felt really honored that they thought I was good enough to do that. That they trusted me in that way is amazing and I feel really, really grateful for that.”

Michael Aaron Gallagher: “Did you do anything special to prepare for the film?”

Lotte Flack: “Well, first of all, they had to put some extensions in my hair to make my hair darker. And I had to wear contact lenses all the time. Other than that, I prepared the Latin. Because there is a lot of Latin in the lines and I had I think about ten lines of Latin or something, and I don’t know any Latin, because I had French in school instead of Latin so I had a friend help me who had Latin in school… I still know the Latin by heart.”

Michael Aaron Gallagher: “What do you like most about this film?”

Lotte Flack: “For me, being there, having worked on the film, it’s not so much about the end product as it is the experience shooting it and the set experience. And I’m not lying about this and I’m not exaggerating when I say it’s the best work experience I’ve ever had. The team was amazing. The director was great. Everyone worked together so well. We got finished before schedule, and if anyone knows anything about film, that’s amazing because usually you have a schedule and you usually finish two hours after that. So we got finished before that sometimes and it was just amazing…. It was a great, great experience.”

Michael Aaron Gallagher: “Do you have a favorite scene?”

Lotte Flack: “Probably, although it was horrible to shoot and I didn’t enjoy the shooting, the one where I get ink poured over my head. Because it just ended up in the film. It’s so good, and we did, I think, four takes of it. They didn’t have real ink, because it wouldn’t wash out of my clothes and my hair. But they had this fake ink stuff and it was – the feeling can be described as having cold slime poured over your head by twenty people. It’s not fun and it was work, it was a lot of work. But the scene ended up in the film so well. It’s a really great scene.”

Lotte Flack is currently in casting for a few projects and will likely be shooting for German TV in September. For more information about her work visit IMDb and her Wikipedia page. You can also follow Michael Aaron Gallagher on Twitter at www.twitter.com/stayfamous and become a fan of StayFamous on Facebook at www.facebook.com/stayfamous to keep up with the latest entertainment news.

Photographs by Michael Aaron Gallagher – All rights reserved.
To request permission to use excerpts or to quote StayFamous.Net on television or in print please contact StayFamous.Net.