“Powerful, genuine, and soulful, ‘Truth or Dare’ is the album you’ve been waiting for.” 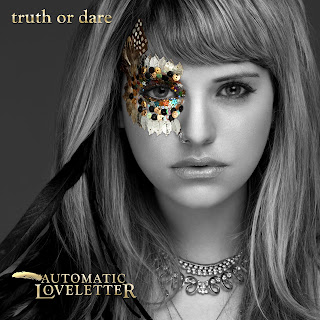 It’s 2 p.m. on a Wednesday and Juliet Simms is arriving back at her hotel room in Los Angeles, where she is getting ready to film the music video for “Heart Song,” the first single off her new album “Truth or Dare.”

Despite her busy travel schedule, she takes a moment to do a telephone interview with a reporter in New York.

Simms, who is the lead singer for the up-and-coming rock band Automatic Loveletter, will soon be on the road again, joining the Vans Warped Tour with fellow band mates Tommy Simms (guitar), Clint Fowler (bass) and Ryan Metcalf (drums).

As a talented young musician, Juliet describes herself as the girl next door, a down to earth, sometimes goofy, no holds barred 24 year-old, who remembers the days when she would come home and watch “Buffy the Vampire Slayer” with her mother.

When the band is on tour, she especially appreciates staying in touch with her family and friends over the phone, by text message or on Facebook. “They support me so much,” she said.

Despite the challenges of being away from home, she still finds time for herself. “I wake up in the morning and I like to have alone time for a few hours.” Simms said, “I wake up earlier than everybody else. I’ll do yoga or go workout or go get some coffee.”

Although she enjoys performing on stage, Simms admits she also loves sitting on her bed with her guitar and writing a song. “I feel like I’m creating something out of thin air,” she said. “It feels magic.”

On June 22, Automatic Loveletter will release their highly-anticipated new album “Truth or Dare” on SIN (SonyMusic Independent Network), a record that is both spellbinding and emotional. It is impossible not to fall in love with Juliet’s free personality, her energetic style, and her passion for making quality, timeless rock-and-roll.

“I just want to make music that lasts forever.” Simms said. “I didn’t want this album to be in the moment… I want it to be something that my grandchildren will listen to and dig, because it’s a good song.”

According to Simms, “Truth or Dare” took around seven or eight months to complete, although some of the songs were written in years prior. The simple, yet dazzling album artwork, which was partially inspired by 1980s pop icons Madonna and Blondie, whose faces were featured on the front of their records, also incorporates a stylish use of feathers and Juliet’s own passion for glitter and trendy makeup.

From the StayFamous.Net “Favorite Song on the Album,” “Fade Away,” to the song that begs to be played again and again, “Don’t Let Me Down,” Automatic Loveletter demonstrates they can deliver catchy choruses and songs that listeners can relate to. Juliet Simms is a storyteller, whose passionate vocal performances mimic her true feelings. Her lyrical storytelling ability in songs like “Story of My Life” effortlessly draw you in.

“Let it Ride” is a song that doesn’t hold back. Showcasing the range of Juliet’s vocal ability, the track stands up to any band on the radio today.

Listen to a message from Juliet:

“I like having an impact in other people’s lives.” Simms said. “I feel like I feel ten times more than most people. I guess that comes out in me when I’m singing and performing, because I’m not putting on a show, it’s actually how I felt during writing that song and how I feel about that song.”

With music as stunning as the album’s cover photo of lead singer Juliet Simms, Automatic Loveletter’s “Truth of Dare” will leave you breathless.

Automatic Loveletter’s debut album “Truth or Dare” is available June 22. For more information visit the band’s official Web site: http://www.automaticloveletter.com/. You can also follow Juliet Simms on Twitter at www.twitter.com/JulietSimmsALL and listen to their music at www.myspace.com/automaticloveletter.