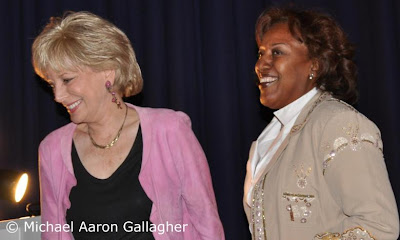 Lesley Stahl and CCH Pounder were in attendance at Rochester’s
The Little theater, where the film “Easy Virtue” (starring Jessica Biel)
was screened following the award ceremony.
Among the attendees for the 2009 film festival (May 13 -18) were Oscar nominated actress Lynn Redgrave (“Confessions of a Shopaholic”), Emmy nominated actress CCH Pounder (“The Shield”) and Emmy award-winner Lesley Stahl (“60 Minutes”).

With more than 80 movie titles presented at downtown Rochester’s historic The Little theater and at the Memorial Art Gallery, the festival drew sell-out crowds and generated an estimated $1 million in revenue for area businesses.

On May 15, prior to the screening of “Easy Virtue” (starring Jessica Biel), Lesley Stahl presented actress CCH Pounder with the Susan B. Anthony “Failure is Impossible” award. 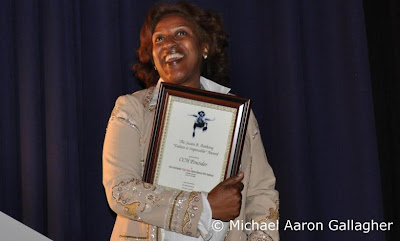 During her acceptance speech, Pounder said, “In the event that there is a young actor in the audience tonight, I just want to say that this is not necessarily a chosen career. It kind of happens upon you. And if you really, really want to do it, there is no one to blame – there is no mother who didn’t encourage me, there is no one who didn’t give me the money, there is something within the body of you that creates an actor. So if there is anyone around you who says, ‘I don’t know how to do this,’ it’s not true. An actor will find his or her water and swim.”

On May 16, actress Lynn Redgrave, whose legendary career includes the upcoming animated film “My Dog Tulip,” also received the Susan B. Anthony “Failure is Impossible” award. In her acceptance speech, Redgrave paid tribute to the late Natasha Richardson, calling her “an exquisite actress” and “the bright light of our lives.” 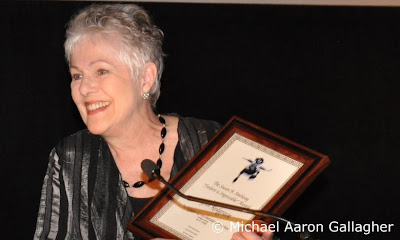 Oscar nominated actress Lynn Regrave received the Susan B. Anthony
“Failure is Impossible” award at the 2009 RHFIFF.
“I am very, very moved to receive this award.” Redgrave said, “When I wanted to be an actor, it was because I wanted to crawl under the skin of other people and not be myself for a while. I now do, actually, really like being myself, but I still get the biggest high, the biggest excitement, the biggest thrill from crawling under the skin and trying to disappear into other people’s lives, and I applaud you at this High Falls Festival for really helping women – women filmmakers.”

Throughout the six-day film festival, moviegoers had the rare opportunity to participate in conversations with celebrity guests Pat Carroll (“The Little Mermaid”) at the Memorial Art Gallery, CCH Pounder at Geva Theatre, and Lynn Redgrave at The Little. 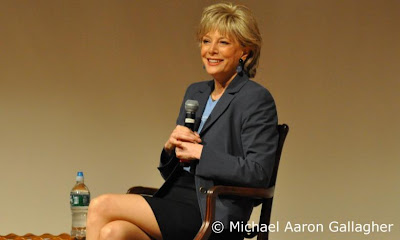 Lesley Stahl answered questions from the audience following her
Conversation with Catherine Wyler at the Memorial Art Gallery in Rochester, NY.
In her discussion, she spoke candidly about the role of the First Lady in the White House, how stories are submitted by correspondents at “60 Minutes,” her entrepreneurial venture for women called WowOWow.com, and the importance of the media in the preservation of democracy.

“In our system, the fourth branch of government is the press.” Stahl said, “It’s very scary that newspapers are one by one, going out of business. It is not healthy for our society. We have a system that is perpetually cleansing itself, and the reason it cleanses itself is because of the press. You look at other societies where the press is not free and strong and healthy – there is endless corruption.”

The 2009 RHFIFF provided a unique opportunity to support the work of women in the motion picture industry. From celebrity guests and revealing discussions to parties at Rochester Institute of Technology’s School of Film and Animation and the grand opening celebration at the new Max at High Falls Event Center, the festival continues to inspire and entertain audiences from around the world.