“Touching and original, ’20 Mississippi’ pulls at your heartstrings and makes you believe that happy endings can be found even in sorrow.”
– StayFamous.Net 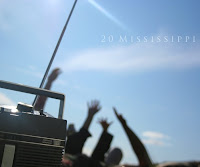 Although student films are not generally reviewed by mainstream media outlets, “20 Mississipi” (written and directed by Michael Brettler), provides many lessons for aspiring young filmmakers.

With a talented cast that includes actress Kellyn Lindsay, whose movie “Where are you Sophia?” recently premiered at the 2009 Cannes Film Festival in France, Jack Gargaro (“Lonely Joe”), and Kirk LaSalle (“Ms. Cannibal Holocaust”), “20 Mississippi” is not your ordinary student film. In fact, the entire project was shot in six days with a budget of under $1,000.

On April 21, I attended the Syracuse University screening of “20 Mississippi” at the Senior Film Showcase.

What I especially admire about the film, which is 59 minutes in length, is that its plot is carefully crafted. Many student directors make the mistake of rushing a script so they can focus on their love of shooting a movie. But when an independent filmmaker takes the time to establish three-dimensional characters and envision the overall direction of the piece before the cameras begin rolling, the audience can truly appreciate the outcome. 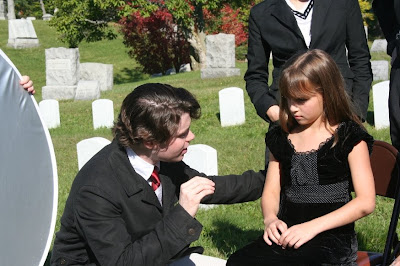 Writer/Director Michael Brettler (left) and actress Andee Neuscheler (who plays the young Colleen) on the set of “20 Mississippi” in Syracuse, New York.
Michael Brettler’s “20 Mississippi” tells the story of Colleen (played by Kellyn Lindsay), a girl who continues to re-enact the painful death of her brother Earnest (Spencer Howden), in order to come to terms with his disappearance. The juxtaposition of her childhood memories of her brother with the dark realities of war and grief, make the film’s colorful imagery even more powerful. It is a poignant tale of a brother and sister’s love for each other that is both uplifting and original. And with a compelling soundtrack by Chris Weeks, there is no doubt that both Weeks and Brettler deserve credit for producing two individually outstanding projects that deserve attention. “20 Mississippi” is hands down one of the most memorable student films I have ever seen.

“20 Mississippi” also provides many lessons for aspiring young directors. If you are passionate about movie making, you must devote your time to the whole project, not just the process of filming and editing the video. You have to create your vision by developing a story that is worth telling, one that an audience can identify with.

Many amateur directors simply make a motion picture, without recognizing that a story is nothing without an audience that can connect to its themes, to the lives of the characters, and to the ultimate outcome. Whether a film is ever made into a full-length feature or not, it should be a movie that people want to watch again and again. It should be a story that makes the audience ponder a sequel, even when it is able to stand on its own. In the case of Brettler’s film, you desperately want Earnest to be found alive, despite the emotional challenges and new struggles it would introduce into the character’s lives. A good story is one that never ends. A great story is one that never truly begins.

Here are some lessons you can learn from “20 Mississippi:”

Advice for aspiring filmmakers
1. Use Real Actors – There are plenty of aspiring independent film and theater actors out there who are willing to work on a movie project, especially if they can build a show reel and hone their skills.

2. Develop Your Story – A well-thought-out script makes the best movie. If you have worked on your screenplay and considered locations, camera angles and the elements that are most important to achieving your vision, you will have a far better chance of reaching your audience. Many actors and actresses sign up to do a project because they liked the script. That means your screenplay needs to be able to stand on its own. Think of it like a novel. If your audience wouldn’t want to read it, they probably won’t want to see it either.

3. Music is an Important Character – Spend time selecting your music as you would an actor in your film. With the right tempo, you can create a mood that action alone could never achieve. Think of your film like a music video, and pretend that your actors are dancing to the song. If it flows, the message in the lyrics, the vocals and the volume of the music will add a new dimension to your project. Be careful not to overdo the music, but always remember a good film must have a good soundtrack.

4. Make Movies – If you want to be good at something, you have to practice just as hard as you intend to perform when it really matters. Michael Brettler could have cut a lot of corners in making his student film, and he would have still made a passing grade in his class. But if you love making movies and you really want to tell a story you can be proud of, take the time to invest in your ideas. Work hard to find opportunities to have your project shown at film festivals (both locally and around the world). No movie is perfect, and there are always things that can be improved, but if you practice hard and continue to make movies you are passionate about you will find yourself much closer to your dream.

If you would like to obtain a copy of “20 Mississippi,” please visit www.20mississippifilm.com.