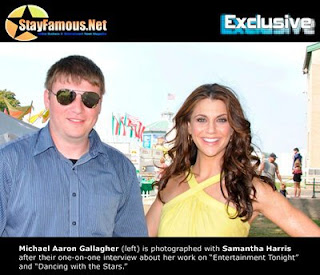 (Syracuse, NY) – An anchor for the world’s most watched entertainment news program, “Entertainment Tonight’s” Samantha Harris recently made an appearance at a live taping of the show “Bridge Street” with Chris Brandolino and Tanja Babich at the New York State Fair. Her visit to Central New York coincides with the move of “ET” to News Channel 9, an ABC affiliate, on Sept. 13.
Harris arrived in Syracuse at around 1 a.m. and was also interviewed on the afternoon news with Carrie Lazarus. She was scheduled to return shortly afterwords to Los Angeles, where “ET” is taped, along with its sister show “The Insider.”
“I was thrilled,” Harris said. “I’ve never been to Syracuse before.… it was really a blast to be on for their whole show. They do a wonderful job. And it’s also fun being pregnant myself to be able to speak with Tanja, who of course is due any day, and Chris, whose wife is due just before me.” 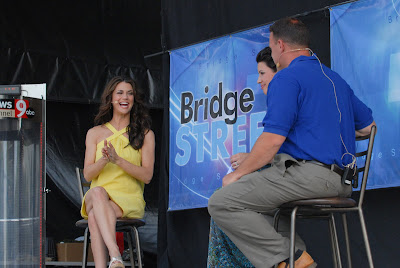 Photo by Jim Lamanna
Following eight seasons as a co-host on “Dancing with the Stars,” Harris recently became an anchor at “Entertainment Tonight,” where she once interned during college.
“I’ve worked at every single entertainment news show there is that’s in the syndicated market and ‘Entertainment Tonight’ is number one for a reason,” Harris said. “We have access to the stars, to the movie sets, to the TV show sets, that no one else has, exclusive set visits, one-on-one sit down time, whether it’s Tom Cruise, George Clooney, the cast of ‘Glee,’ or ‘Modern Family.’ We have access to all of them. I spent time in Austria and Spain with Tom Cruise and Cameron Diaz, I was in London with Jake Gyllanhall, no other show has the budget to put you there with the stars and no other show has the access and that’s why ‘Entertainment Tonight’ is the place to be.”
“It was an absolute pleasure having Samantha on the show,” said NewsChannel 9 meteorologist and “Bridge Street” co-host Chris Brandolino. “I had an opportunity to spend some time with her off camera, and she is just as pleasant off camera as she is on camera. She’s expecting her second baby, in fact, her due date is very close to that of my wife’s (we’re expecting our third) in mid January. No doubt she’ll do well with her new role on ‘ET.’”
“Bridge Street” airs in Central New York weekdays at 10 a.m. and “Entertainment Tonight” with Samantha Harris can be seen weeknights at 7 p.m. starting Sept. 13 on NewsChannel 9.