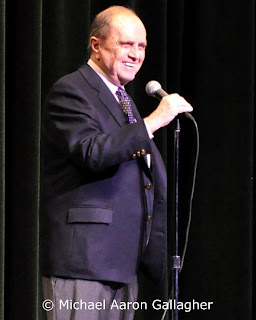 Performing a mix of comedy routines that included his beloved classic “The Driving Instructor” and skits that required a range of accents, Newhart’s comedy act continues to be classy, current and something that audiences of all ages can appreciate.

“To survive, you must have a sense of humor.” Newhart, who recently celebrated his 80th birthday, told the audience.

From delivering jokes about Syracuse University rival, the Georgetown Hoyas, and flying to the city on a “little plane” (because larger planes apparently don’t fly into our airport) to reminiscing about experiences on popular television shows, he preceded many of his jokes with the line, “This is an absolutely true story.”

Among his many film and television roles, Newhart is known for his appearances on “The Bob Newhart Show,” “Desperate Housewives,” “ER,” “Saturday Night Live” and the popular holiday movie “Elf” (starring Will Ferrell). 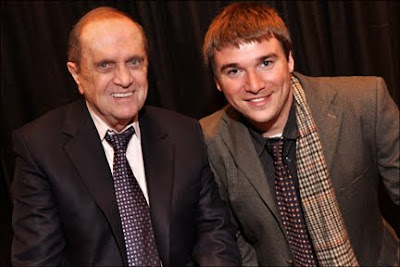 Michael Aaron Gallagher (right) is photographed with legendary comedian Bob Newhart (left) three days before the 61st Annual Primetime Emmy Awards, where he was nominated for Outstanding Supporting Actor in a Miniseries or Movie. Photo by Laura Brazak.

Three days after his appearance in Syracuse, he attended the 61st Primetime Emmy Awards, where he was nominated for Outstanding Supporting Actor in a Miniseries or Movie for his role as Judson in Electric Entertainment’s “The Librarian: The Curse of the Judas Chalice” (directed by Jonathan Frakes).

Newhart is the fourth performer to participate in the Loretto program, which includes past guests Carol Channing, Robert Goulet, and Chita Rivera.

Proceeds from this year’s event benefited the Loretto Foundation, whose mission is to “enhance the quality of life for older adults in Central New York.” With 22 programs at 19 locations, Loretto cares for more than 6,000 older adults annually, striving to deinstitutionalize the traditional nursing home model by providing person-centered care through greater independence, personal choice and more freedom for seniors.