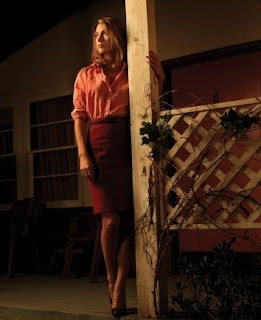 As enticing as southern fried chicken with a plot as sharp as a scorpion’s stinger, “Justified

When Deputy U.S. Marshall Raylan Givens is reassigned from the Miami office to his boyhood home state of Kentucky, he begins a complicated journey that reunites him with family, old friends and lost loves. Based on the character by novelist Elmore Leonard, Givens, played by actor Timothy Olyphant (“The Crazies

”), is an unorthodox, cowboy-style lawman with a reputation for stirring up trouble as quick as his draw.

With strong performances by co-stars Walton Goggins (who creates a three-dimensional transformation as Boyde Crowder), Joelle Carter (who nails the role as the all-grown-up girl-next-door), Natalie Zea (whose combination of toughness and finesse is both alluring and disarming), Nick Searcy (who solidly delivers an especially powerful outburst in episode seven, “Blind Spot”), and Raymond J. Barry (whose mysterious aura transcends the small screen), “Justified

” takes on the worn-out television crime genre and redefines it with a much-needed change of scenery and a whole-new personality. 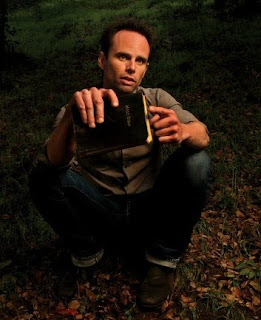 ,” Goggins is surprisingly unlike his new television character. In fact, he is one of the most intelligent and articulate actors I’ve had the opportunity to interview. His understanding of the role and the importance of crafting his character to effectively shape each layer of the story is both profound and impressive.

The strong cast of supporting actors, each of whom bring their own unique on-screen talents, give every episode an authentic southern flavor and rhythm in the language and storytelling. The juxtaposition of humor with drama, action and suspense creates a world where criminal caricatures can coexist with a dynamic, ever-evolving backstory. As the season progresses the characters begin to evolve and take shape, and it becomes less about law and order and more about the stories and sub-plots that weave in and out of each episode.

In a recent interview, actress Natalie Zea, who plays Raylan’s ex-wife Winona Hawkins, told me how she became involved with the series.

“I read the script over a year ago, that’s for the pilot, and I really liked it because it was so different from anything that I had been reading during that particular pilot season,” Zea said.

“And I told my manager I wanted to see if we could fight for this…They actually didn’t want to see me. So we had to kind of make some phone calls and get creative, and finally I got an appointment to go in and read; and I read and it was an awful audition and I forgot about it. And about a month later, I got the call saying that they were going to fly me out to Pennsylvania and I was going to shoot the pilot.”

“The pedigree of having FX and Elmore Leonard and Tim Olyphant, it just seemed so silly not to really, really try and pursue it, because it seemed to be a formula that you kind of couldn’t beat.”

Zea, who serves on the Board of Directors for Lone Star Ensemble (theater company) and has also appeared in HBO’s “Hung

,” described what sets the show apart from other crime dramas.

’ has a feeling that’s unlike any other show at least that I’ve seen,” Zea said. “We’ve gotten into the habit of setting shows in New York and LA only. And there’s so much more going on in between those two coasts.”

“I think it has this dark…and mysterious, yet accessible feeling to it that I haven’t really seen on any other show,” she continued. “There’s something lush and mysterious and kind of weird about the world of ‘Justified.’”

When asked if she has a favorite scene or episode, Zea replied, “I do, episode 11, and I won’t elaborate on that.”

What could it be that makes episode 11 so important to her? To find out, watch “Justified