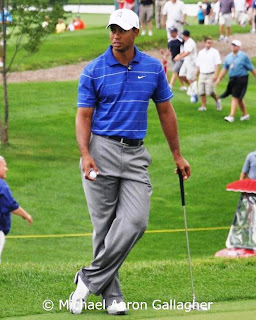 As the number one professional golfer in the world, Tiger Woods has been entertaining crowds with his enthralling showmanship since his national debut on The Mike Douglas Show with Bob Hope in 1978.

This year’s event raised more than $1 Million for the programs, scholarships and services of the Notah Begay III Foundation, whose nationwide mission is “to promote the health, wellness and leadership development of Native American youth.” 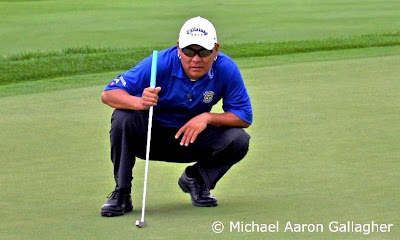 Notah Begay III evaluates the contour of the green as he prepares for a putt in the 2009 Notah Begay III Foundation Challenge at the Turning Stone Resort’s Atunyote Golf Club, Vernon.

“It’s a great collaboration” Begay III said, “everybody’s working hard, because we believe in the cause.”

More than 3,000 spectators, including children from The First Tee of Syracuse, a local chapter of the World Golf Foundation’s initiative, which strives to foster a culture of sportsmanship in students and instill other life lessons from the game of golf, gathered to watch Woods’ first appearance at Atunyote.

As a vocal champion in the fight against diabetes and obesity among Native American youth, four-time PGA winner and former Stanford University roommate of Woods, Notah Begay III generously donated more than 200 tickets to local non-profit organizations in Central New York to allow area youth to “take part in the event and experience world-class golf up-close.”

According to Tina Kapral, manager of program services at the Make-A-Wish Foundation of Central New York, the organization received ten tickets to the Challenge, which were given to local “wish kids.” Headquartered in East Syracuse, they currently serve those with life-threatening medical conditions in 15 counties throughout New York State. 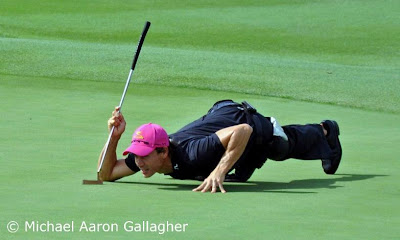 With partly cloudy skies, a brief sprinkle in the morning and light winds out of the West, Tiger Woods managed to come from behind to secure a victory by the 18th hole.

Despite the friendly rivalry between the players and the competitive nature of the skins game format, “Our minds are on this foundation,” Weir said, echoing the sentiments of defending champion Camilo Villegas who reminded everyone that, “At the end of the day, we’re here for charity.”

From left, Tiger Woods, Mike Weir, Notah Begay III and Camilo Villegas make their way down the fairway in the 2009 Notah Begay III Foundation Challenge at the Turning Stone Resort’s Atunyote Golf Club, Vernon.
“One of the things my father had always said is that everyone should make a difference in someone else’s life every day,” Woods said.