The Vox Jaguars: Clawing their way to the top

“The Vox Jaguars: Clawing their way to the top”
By Michael Aaron Gallagher

The Vox Jaguars may just be the coolest band out of high school. But don’t let their age fool you. With a sound that rivals The Strokes, The Bravery, and The White Stripes, they are the next rock band to add to your music playlist. 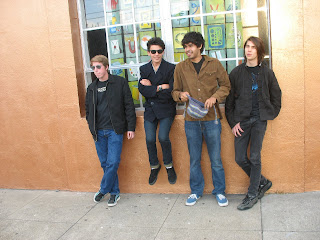 On Feb. 10, the group released their debut self-titled EP on Anodyne Records. Although it is only a four-song CD (which was arguably born for vinyl), the album includes “Swagger,” a single which has the perfect blend of lethargy and dynamism – a punk rhythm and attitude that makes it perfect for a car commercial or just about any clothing company that considers themselves a hip, youthful brand.

Tracks on the new EP include:

1. Swagger * Top Pick for StayFamous.Net “Favorite Song” on the Album
2. Wild Orphan * Must Listen to Song
3. Song for the Girl
4. Homesick

There’s no doubt that if The Vox Jaguars continue to deliver catchy melodies and terse lyrics, within a blend of cool sound effects that channel Atari video games and Star Wars action figures, they too will enjoy a faithful fan following for decades to come.

To check out the band’s new album and add them as a friend, visit: www.myspace.com/thevoxjaguars.