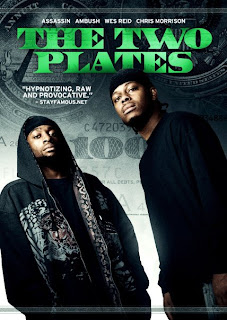 From start to finish, “The Two Plates” has an authentic urban feel that no big-budget Hollywood movie could possibly match. Filmed in the “mean” streets of Richmond, VA, featuring a cast of local hip-hop artists, it is a story of best friends and hustlers who acquire two plates used in the process of making counterfeit bills. When the Secret Service begins to put pressure on their illegal operation, nothing turns out the way they planned.

At the 2008 B-Movie Film Festival, where “The Two Plates” made its film festival debut, director Jonathan Straiton talked about the production process. “I’ve been making movies since I was a kid,” he told the audience. “It took me about six weeks to write the script.”

Much of the authenticity of the film comes from the way Straiton worked with his cast to create realistic dialogue, allowing the actors to improvise some of their lines in order to achieve a natural, urban feel. They also used AeroSoft guns with realistic chamber motion and added special effects using Adobe After Effects with Muzzle Flash Pro plugins, Magic Bullet and HD filters to give it a more genuine look.

“Some of the scenes I would edit two different versions,” Straiton said, “and then I’d see what worked and what I liked about it.” The entire process took around two years to complete.

“When I first started writing the script I pitched it as ‘To Live and Die in LA’ meets ‘Boyz in the Hood,’” Straiton told me in a recent interview. “I’ve always been a fan of crime pictures and also had a great appreciation for hip hop, so combining the two was definitely something I was passionate about.”

Audiences accustomed to sugar-coated storylines and straightforward dialogue, may find “The Two Plates” with its drug reference, strong language and violence difficult to digest, but from an artistic standpoint, it is a solid urban feature that holds its own with some of the best indie action scenes and hip-hop soundtracks released today.

The main character Deshaun (played by hip-hop recording artist Assassin), delivers a strong performance that leaves you wanting a sequel, and Derrick Johnson provides excellent comic relief during some of the more tense moments in the plot.

In February of 2010, “The Two Plates” (Maverick Entertainment) was released on DVD. For more information, visit www.TheTwoPlates.com. Click here to buy