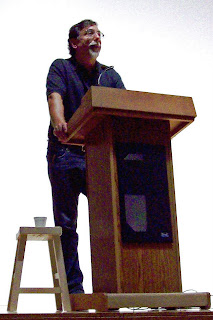 (Syracuse, NY) – The Everson Museum of Art recently offered a special screening of the original film, “Winslow Homer: Society and Solitude.” Directed by Emmy Award-winning filmmaker, Steven Ross, the documentary explores the life of Winslow Homer, the historical significance of his art, and the juxtaposition of death and beauty in his work.

“Winslow Homer: Society and Solitude” (2007) is the first feature-length documentary on the life and career of the artist. Filmed on location throughout the United States, the project took 7 years to complete. By the end of the filmmaking process, visual technology had improved, enabling Ross to utilize high-resolution digital photographs to present the true masterpiece of Homer’s artistry in rich, colorful detail. With more than 180 vibrant images, including oil paintings, watercolors, wood engravings, sketches, and photographs, Ross presents the man, the myth, and the legacy of one of America’s most revered artists.

“Winslow Homer: Society and Solitude” is masterfully crafted, visually intriguing, and thoroughly researched. It is a story of a troubled man, who depicted the true essence of Americana, distilling nineteenth century life into an artistic journey of youth, nature, humanity, war, and emotional, thought-provoking imagery.

Homer was both a popular mass media artist and, in later years, a reclusive hermit. Devoted to nature, he was a man who spent a great deal of time outdoors, as evidenced by his treks in the harsh wilderness landscapes of Maine, Quebec, and at the North Woods Club in the Adirondacks, which served as a source of inspiration for many of his pieces.

Although, at times, his work was viewed by critics as everything from “unfinished” to “scandalous,” he still managed to find commercial success. Some of his most notable paintings include “Breezing Up” (1876), “The Herring Net” (1885), and “The Fox Hunt” (1893). As a contributor to Harper’s Weekly magazine, his elaborate illustrations, wood engravings, sheet music covers, and paintings evolved, along with the man himself.

Director Steven J. Ross is a native of Elmont, NY (Long Island). As a teenager, he was interested in movie-making, although, like many youngsters, he admits he didn’t take Winslow Homer’s work seriously. After graduating from New York University, he later went on to direct projects like, “At the River I Stand” (1993), “Oh Freedom After While” (1999), and “Black Diamonds, Blues City: Stories of the Memphis Red Sox” (1997), which was narrated by Samuel L. Jackson. Now a professor of communication at the University of Memphis, Ross continues to use film to chronicle stories that are unique and substantive.

Following the Everson screening of “Winslow Homer: Society and Solitude,” Ross reflected on his desire to work on the project, noting that as he grew older, he began to understand that there was, “so much going on beneath the surface,” in Winslow’s work. As a director, he eventually marveled at the skill and complexity of his art, appreciating “how many different approaches Homer can handle.”

One of the most intriguing aspects of the documentary’s development was the long-distance collaboration between Ross and Joel Goodman, the film’s soundtrack composer, which took place over the telephone and Internet. Using modern telecommunications to bridge the divide, the filmmaker was able to discuss upcoming tonal changes in the film, where the score needed to be tailored to reflect the mood of the scene. In fact, to this day, Ross has never met Goodman in person.

David Tatham, Syracuse University Art Historian and author of “Winslow Homer in the Adirondacks,” also contributes throughout the film, providing an in-depth analysis of Homer’s paintings. As one of the foremost scholars on Homer’s magazine and book illustrations, Tatham has published several books on the artist, giving the viewer a visual interpretation of the meaning and symbolism behind the subjects Homer portrays.

“Winslow Homer: Society and Solitude” is more than a biography. It is a celebration of classical art, a contemplative study of art history, and a portrait of a revolutionary innovator.