Forty years since its original release, “Night of the Living Dead” (1968) has earned its reputation as a cinema classic, still enjoyed by audiences today. On Oct. 30, SRS Cinema, which is an independent motion picture distributor, presented an anniversary screening of the film at Zombie Fest 2, including special guests, actor Russ Streiner (“Johnny”) and screenwriter John Russo. 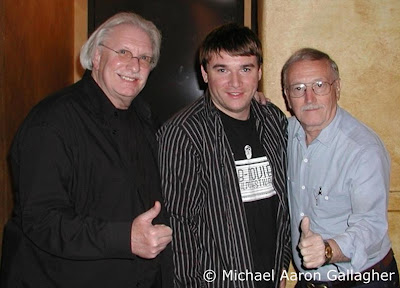 Actor Russel Streiner (left) and screenwriter John Russo (right) pose with Michael Aaron Gallagher (center) at the 40th Anniversary Screening of the classic film “Night of the Living Dead” at Zombie Fest 2.
Both filmmakers provided live commentary during the show, offering unique insights into the movie-making process. In his opening remarks, Russ Streiner thanked the event’s organizer, award-winning indie film director, Ron Bonk saying, “I want to thank Ron Bonk. He’s one of the great guys to have in this business, always working hard. He’s a good filmmaker, as well as distributor, and you’re fortunate to have him here in Syracuse, helping to keep independent filmmaking alive.”

One of the most interesting aspects of the presentation, included the sentiment by John Russo that if they had known the film was going to become such a beloved member of its genre, they would have saved the farmhouse, which served as a key location for the movie, from being torn down. Instead of allowing it to be demolished shortly after filming concluded, Russo noted the desire to have the location serve as a museum.

For many younger audiences, who may not have seen “Night of the Living Dead,” the event provided an opportunity to see a film that has truly influenced the motion picture industry, and continues to serve as inspiration to filmmakers around the world.
“SRS Cinema Presents 40th Anniversary Screening of
‘Night of the Living Dead'”
Copyright © 2008 by Michael Aaron Gallagher