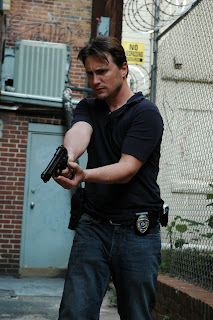 Known for his role as Brody in the new horror movie “Butchered” (2009) and as former “Full House” star Jodie Sweetin’s love interest in the charming independent film “Port City” (2009) by Director Andy Brown, Shaun O’Rourke is balancing an active career as a writer, director and actor living in Wilmington, North Carolina.

His leading role in the Web series “Port City P.D.,” helped propel the show’s overseas success, premiering in England, Ireland, Scotland and Wales on the television network BSkyB (British Sky Broadcasting) in May of 2009. Later this year, the program will be broadcast to more than 40 countries on the America Unleashed Network.

As one of the founders of Eleven Bravo Productions, O’Rourke is continually challenging himself to take on roles he is passionate about. I had the chance to ask him about his new film and how he got started in the movie business.

Shaun O’Rourke: “I first started performing when I was 3 or 4 years old. I was in a Halloween talent contest. I remember being on stage in front of what felt like the whole town, which could have been, since Bayonne, New Jersey is so small. I sang a verse from the song ‘Ring My Bell’ which was a hit back then in the 70’s. I guess I loved performing in any way I could and naturally it progressed from there.”

Michael Aaron Gallagher: “Tell me a little bit about your role in the movie ‘Butchered.'”

Shaun O’Rourke: “Well not only did I serve as a producer/writer on the film. I directed second unit pick-ups as well. So I had a few hats on as the film evolved. I played the character of Brody who is the older brother of one of the teenage kids that is being stalked on the island by the serial killer. Brody does get to save the day, which is always fun for me.”

“I helped name most of the characters in the film during the writing process. Brody pays homage to the character of Chief Brody from the film ‘JAWS.’ My wardrobe in the film is very similar to Robert Shaw’s Character Quint from ‘JAWS’ as well – my way of tipping my hat to my favorite film.”

Michael Aaron Gallagher: “What is your dream role and who would you like to work with?”

Shaun O’Rourke: “Who wouldn’t want to be Indiana Jones? I am a physical actor. I love to jump, run, drive fast cars, get into shootouts and fist fights. I think working with Harrison Ford would be great, but I would love to get Gene Hackman out of retirement just to do one scene in a film. So many actors now are manufactured that we only get a Robert Duvall or a Gene Hackman every 40 years.” 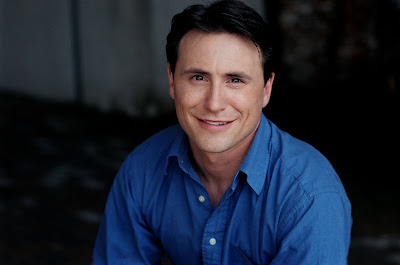 “Port City P.D.” actor Shaun O’Rourke stars
in the new horror film “Butchered” (now available on DVD).
Michael Aaron Gallagher: “For you, what’s the hardest part of being an actor?”

Shaun O’Rourke: “Getting parts that are written well. I know in the first 10 pages if I care about a project. I read a lot of scripts, but turn down a lot of work. Actors have to set the bar for themselves even when they are first starting out or they will do a lot of bad work. That includes commercials. I turn down auditioning for so many my agent must think I am crazy. For me it’s not about the money. I have to believe in the product or actually use it myself before I will endorse it. As far as films go, I am only focused on projects that blow my mind. Unfortunately, I don’t see many come across my desk these days.”

Michael Aaron Gallagher: “What’s the most exciting aspect of your job?”

Shaun O’Rourke: “The race to the finish line. I enjoy starting a project and seeing it through. You get a certain satisfaction about putting a project to rest and moving on to the next challenge.”

Shaun O’Rourke: “Eleven Bravo started with an idea and a goal. Many people start a production company but never really achieve the end goal of a feature film or television project that actually gets on TV or DVD. So I would say, in three years it has grown leaps and bounds, but at a snail’s pace.”

Michael Aaron Gallagher: “You’ve done a lot of scenes working with guns, from ‘Port City P.D.’ to ‘Special Order: 937.’ Did you do anything to train for using them on screen?”

Shaun O’Rourke: “I watch a lot of action films. I love the Lethal Weapon’s and Die Hard’s. I know what looks Hollywood, but also try and bring some realism to it. With ‘Port City P.D.’ we had off-duty police officers telling us when we were doing it wrong. I think you need that when you’re doing a project. That is why I always insist on replica blank weapons. You get a rush when you’re in a shootout where the guns recoil, rounds flying everywhere. The company has had a few former military staff members that keep us in check as well. That’s where the name Eleven Bravo came from – 11th infantry bravo company U.S. Army. The idea was we would fight to get the project finished. Most of the time I was the only soldier fighting. But in the trenches is where I like to be.”

Michael Aaron Gallagher: “How did ‘Port City P.D.’ end up being carried in Europe and what has the reception been like overseas?”

Shaun O’Rourke: “The project lay dormant for a short time. It wasn’t until I met Ashton Blessings while working on the Richard Gere/Diane Lane film ‘Nights in Rodanthe.’ Ashton’s former Full Sail University instructor Jaime Hopper had a relationship with Bidwell C. Tyler, the CEO of Creative Entertainment Media Inc. CEM just signed a deal with Global Broadcasting, the fourth largest satellite company in the world, to provide content to over 40 countries. We sent him a few DVDs and it was the right formula for Europe. They love everything American. We have action, fast cars, beautiful women. The low-budget independent feel is also a plus with all the reality TV out there now.”

Michael Aaron Gallagher: “Are there any special challenges in making a Web series?”

Shaun O’Rourke: “We originally shot ‘Port City P.D.’ for people to view on a two-inch video iPod screen. Looking back, I would have changed a lot. It has been a huge deal to change things for both Europe and U.S. television. We recently did our own ‘Lucas Special Edition’ of the show with a complete per episode re-edit, re-color correct, and full sound design from the ground up. It’s like watching a new show. The second season of ‘Port City P.D.’ will be shot on the RED camera in association with Joe Stauffer’s Broken Wings Productions.”

Shaun O’Rourke: “I have always done impressions and crazy voices. The Anime is a blast. I would love to work with Pixar, Dreamworks, or Blue Sky Studios. I love CG animation. I am captivated with the idea of doing a motion capture film. I think that would be fun and freer then just being in the sound booth.”

Michael Aaron Gallagher: “Are there any charities or causes that are important to you?”

Shaun O’Rourke: “Many of the women in my family suffer from the auto immune disease Lupus. We have seen it hit family members with devastating effects. It’s tough to have family members die from something that has no cure. Lupus Foundation of America is the charity I support. They walk to raise money and awareness.” [For more information, visit www.lupus.org.]

Shaun O’Rourke: “I am excited about another season of ‘Port City P.D.’ We are currently talking with investors and venture capital firms to get the show going again. Now that the show is airing on TV in Europe and now in the U.S. we feel it could have the ‘Baywatch effect’ and grow to be very lucrative. It may even spin into several other shows baring the name ‘Port City P.D.’ a lot like the ‘CSI’ franchises. The future is wide open. My main goal in this business is to focus on acting, but it doesn’t hurt to diversify.”