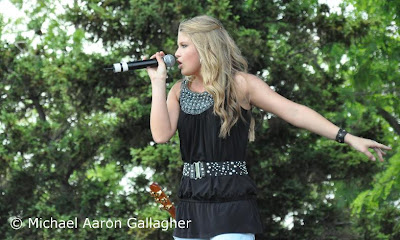 Savannah Outen performs at the 2009 Harborfest in Oswego, NY.
Photo by Michael Aaron Gallagher of StayFamous.Net
A native of Portland, Oregon, 16 year-old singer/songwriter Savannah Outen hit the national stage on YouTube, where her videos have since garnered the attention of some of the top names in the entertainment industry. When fans began requesting more online videos, she suddenly became an international celebrity. Now with more than 150,000 YouTube subscribers and 21,000 friends on MySpace, Outen’s popularity has never been higher, and for good reason.

Not only does she deliver a strong vocal performance in concert, but she also commands the stage with her presence, interacts well with the audience and performs her own original hit songs. Her biggest strengths include how well her live vocal performance matches the quality of the studio recordings, her overall likeability, and the fact that she is confident, genuine and exceptionally talented.

I was especially impressed by Outen’s politeness, as she kindly signed autographs before and after her show. On the way to lunch, following a brief sound check, a couple of fans spotted her across the park and ran up to her. Outen generously stopped, taking the time to not only sign autographs, but also pose for pictures with them. 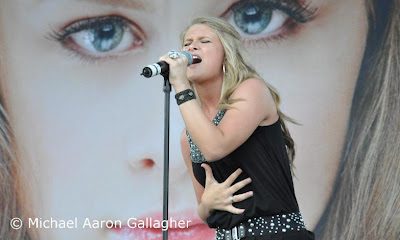 Savannah Outen performs at the 2009 Harborfest in Oswego, NY.
Photo by Michael Aaron Gallagher of StayFamous.Net
During the Harborfest concert, Outen sang two of her most popular singles, “If You Only Knew” (written by Matt Bronleewe, Michèle Vice-Maslin, and Savannah Outen) and “Goodbyes” (written by Savannah Outen), which she explained during the concert was inspired by her graduation from middle school.With songs appearing on the FOX television show “The Simple Life” and “Radio Disney Jams Vol. 11,” Savannah Outen’s music continues to receive critical acclaim, paving the way for a successful upcoming debut album.

And be sure to look for her CDs “Goodbyes” (featuring the radio single, the Spanish version and a karaoke track) and “If You Only Knew” (which contains both a radio version and karaoke track of the song) available now through Levosia Entertainment, LLC.