It’s StayFamous.Net’s second anniversary, and we’re taking a look back at some of the best moments so far. In this exclusive interview, StayFamous.Net guest contributor Faith Prue turns the tables on entertainment correspondent Michael Aaron Gallagher and asks him about his work as a journalist, celebrity photographer and movie actor. 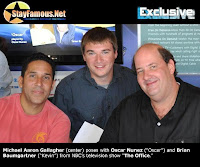 StayFamous.Net: “Where do you get most of your ideas?”

Michael Aaron Gallagher: “Most of my story ideas come from the things I’m interested in. I try to focus on projects that don’t always get the attention they deserve in Hollywood. I’m one of those people who follows my heart, wherever it leads. Sometimes it leads me to amazing stories that no one else has and other times people make fun of me for liking something that isn’t cool. But either way, the articles I write and the photographs I take are important to me, because they give me a chance to let people see the world through my eyes.”

StayFamous.Net: “Who is your favorite actor or singer you’ve interviewed?”

Michael Aaron Gallagher: “Every time I do a new interview I think to myself, ‘This is the best interview, ever!’ I just really enjoy hearing how people respond to my questions. So for me, there isn’t one interview that’s my favorite, although the very first one, with Broadway actress Carrie Manolakos, still means a lot to me. It gave me a chance to try something that I had never done before, and a lot of people in the entertainment industry still read that interview. I’ve come a long way since then, and I’m sure it’s helped open up doors for me. I am so thankful she said yes to me.” 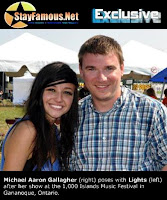 “I’ve always been shy, ever since I was a little kid, so it requires a lot for me to ask someone to do an interview. Even doing a telephone interview can sometimes make me a little nervous, but I’ve been very fortunate to be able to talk to some pretty incredible people over the past couple of years and get to know them. I just really enjoy turning on the TV, listening to the radio or renting a movie and saying, ‘I took their picture’ or ‘I talked to them.’ In the end though, I’m always hoping that my next interview or my next photograph is my best one.”

Michael Aaron Gallagher: “I have a list of about 10 celebrities that I’d like to interview, but I would have to say, right now, Selena Gomez is at the top of the list. It’s funny because as a TV critic for the newspaper I was going to write an article comparing the Disney Channel show “Wizards of Waverly Place” to Nickelodeon’s “iCarly.” I didn’t end up writing the story because I hadn’t really formed an opinion of whether I liked Selena Gomez as an actress or not. Not too long after that I wrote the article, “Why Selena Gomez isn’t the next Miley Cyrus,” which appeared on MSNBC.com for a while. I think a lot of people thought I was being critical of Selena, but really it was more about telling people in the media not to compare the two stars. I think they’re both very talented and driven entertainers.”

“Over time though, I’ve become a pretty big fan of Selena’s work. And I think everyone who knows me, knows that she’s become my top interview choice during the past couple of years. So I guess, even though I wasn’t sold on her in the very beginning, Selena Gomez definitely won me over in the end. Not only is she a talented comedic actress, but I also enjoy her music and really respect the work she does for Unicef. She’s using her star power to be a great role model for young people. I’m just hoping that if I ever do an interview with her, she won’t hold it against me that I wasn’t sure about her potential in the beginning. Because I definitely believe in her now.”

StayFamous.Net: “Which photographer do you look up to and why?”

Michael Aaron Gallagher: “My favorite photographer is Mario Testino. A lot of people celebrate the work of Annie Leibovitz and she’s great, but for me there’s a world of difference between their photos. Annie does an extraordinary job of creating a whole portrait, like her “Vogue” photo shoot with Natalia Vodianova playing Alice in Wonderland, where there is more to the photograph than just the celebrity. But Mario takes a person and makes them look better than their best. It never ceases to amaze me how he can take a celebrity that I don’t find particularly attractive and capture an image that I could stare at for hours.”

StayFamous.Net: “Did you enjoy the acting process when you played in the movie ‘Ms. Cannibal Holocaust?’”

Michael Aaron Gallagher: “Being in ‘Ms. Cannibal Holocaust’ was one of the most fun things I’ve ever done, and for me it was only a six day shoot and I didn’t even have a line in the movie. I just loved being a part of the whole process. I was so excited about doing it, I signed on before I even read the script. A lot of people were surprised when I told them I was doing an independent horror film, but it was great because it gave me an opportunity to show everyone that I could do something different. Most people have seen me behind the camera, but this was my chance to get in front of it. It was so much fun wearing a mask and doing action scenes. I don’t have any aspirations to be a big-time movie actor, but if I get offered another role anywhere in the country, I will definitely consider it. It’s just too much fun to say no.”

For more information on Michael Aaron Gallagher, visit his official Web site http://www.michaelaarongallagher.com/. You can also follow him on Twitter at www.twitter.com/stayfamous.