For Kirk LaSalle, who has appeared in films with Nick Stahl and Matt Damon, the City of Syracuse has a wealth of talent that still has yet to be fully utilized by Hollywood casting directors. Rather than waiting for local actors to be recognized in the entertainment industry, LaSalle created a place where they could share their experiences, organize workshops, learn some of the tricks of the trade and find new movie roles. 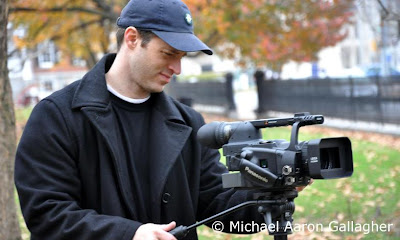 Kirk LaSalle works behind the camera on a music video.
Photo by Michael Aaron Gallagher – All rights reserved.
“As a local actor, I wanted to do more, practice more, study more and become a stronger performer,” LaSalle said. “So I started to do some research and I quickly found that there weren’t any local acting groups – specifically “film actors groups.”

After researching the benefits of social networking sites to create a platform for collaboration, LaSalle developed a framework and started The Salt City Actors Group (SCAG), an online community dedicated to the talent found in Central New York (www.saltcityactorsgroup.ning.com).

“Film production has been growing in Syracuse for some time now.” La Salle said, “so has the number of local and regional actors. I wanted to have a local place to practice and learn and I thought if I felt this way about our actors community, then there must be others who do too.”

As the Syracuse Film Office and the Syracuse International Film Festival (www.syrfilm.com) continue to bring in new movie projects and promote international collaboration among writers, directors and producers, Syracuse-based movie actor Kirk LaSalle is also doing his part to assemble a place where local actors can find roles and network with other members of the Syracuse filmmaking community.

Already this year, LaSalle has appeared in seven productions, including the Syracuse University student film “20 Mississippi” (by Director Michael Brettler) and the independent horror film “Ms. Cannibal Holocaust” (SRS Cinema) by Director Ron Bonk and Executive Producer Jonathan Straiton, both of which were filmed in Syracuse.

“I’m working on getting a venue that we can use monthly as well as recruit some regional acting and voice coaches that may donate their time whenever possible. This includes an effort to involve producers, casting directors, filmmakers and distributors to take part in the group as well.”

“My hope is that I can build a framework where local and regional industry professional may donate their time once or twice a year to come and speak to the SCAG group. I believe this will give a lot of insight to the business nature of the industry and actors can learn more about the production side including what the industry expects of a professional actor and how to eventually become a working actor.”