It’s barely afternoon and James Domroe is already finishing up an interview with a reporter and heading out the door to prepare for what could be his next big project. With a long night ahead of him, he is directing his second music video in two days. His latest one, which will be filmed in front of a green screen, is scheduled to wrap at about 3 a.m.

But long days and late nights aren’t slowing him down. By the end of the week, he will make an appearance at an art gallery across town, where his photography debuts in an exhibit that showcases as many as 20 of his original still images on canvas. His popular short films “How to be Happy” and “Paint your World,” both of which can be found on YouTube, will also be on display.

Originally from Buffalo, New York, Domroe grew up in Liverpool and attended Soule Road Elementary school. After graduating from Liverpool High School, he went on to pursue a degree in Electronic Media Communications from Onondaga Community College, a school to which he fondly attributes much of his success. From there he studied film at SUNY Fredonia and upon receiving his Bachelors degree in Communication of Applied Science, Domroe moved to Wilmington, North Carolina, (known as “Hollywood East” or “Wilmywood”) to follow his dream of making movies. 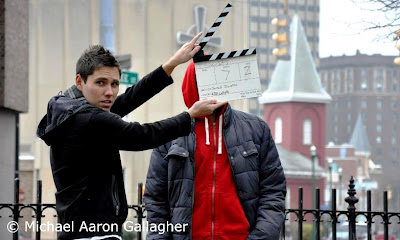 James Domroe (left) directs an unreleased music video for New York City rapper Taj Mahal (right) in downtown Syracuse. It is one of seven projects he has recently produced for local recording artists. Photo by Michael Aaron Gallagher – All rights reserved.
“I moved to Wilmington because of jobs,” Domroe said. “I never really thought of Syracuse as a big film place or TV place.” As a location PA (production assistant) for the CW television series “One Tree Hill,” he was on hand whenever the show needed extra help. But with the impending cancellation of the series looming, he eventually returned to Central New York in search of new opportunities.

Now, six months after returning from Wilmington, Domroe is finding there is no shortage of excitement in Syracuse. When he is not working out at the gym, most of his time is spent collaborating with local recording artists and filmmakers and meticulously editing video footage on the computer, as he creates new concepts for the many projects he has in development.

“I’ve always liked Syracuse,” he said, “If I go and ask people if I can film here, more than likely they’ll say yes.”

Another aspect of filming in Central New York that Domroe appreciates is the diversity of background scenery. “There are a lot of locations here,” he said. “People think Syracuse is kind of bland and boring or dark, but you have parks that are great, there’s a mountain top, and there’re lakes that you can shoot at. Everything that I can ever think of as far as shooting – I can shoot here.”

With an enthusiastic grin, Domroe swivels his laptop around to show how he is using Adobe After Effects software to transform his productions into a more refined, higher quality production. “I want to do commercials locally in Syracuse,” he said as he gives a sneak peak at the opening sequence of a “top secret” commercial he is filming.

In addition to music videos and television commercials, Domroe is also looking forward to working on several independent film projects being planned for the summer by local movie actor Kirk LaSalle. LaSalle is also the founder of the Salt City Actors Group (an online community connecting actors throughout Central New York). “There are quite a few things happening in Syracuse,” Domroe said. “If it wasn’t for him, I wouldn’t be doing any of this. He’s a great guy.” 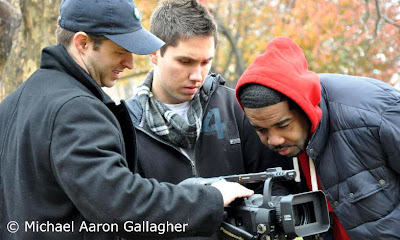 From left, actor Kirk LaSalle, James Domroe and rapper Taj Mahal review the video footage from a recent production. Photo by Michael Aaron Gallagher – All rights reserved.
Domroe and LaSalle recently joined forces to create a pilot for a 10-minute television series called “Around the Town,” which features the best of Central New York businesses, non-profit organizations and interviews with high-profile community leaders. They plan to pitch the segment to local television stations to incorporate it as a news feature or part of an existing program.

For Domroe, life is about love and passion. They are the core themes that guide his work. “The two things I want in life is to be a filmmaker and to have a family.” He believes that everyone should pursue love in their own lives and devote themselves to something they are passionate about.

As he devotes his life to his own passion and love for filmmaking he is witnessing firsthand how his art is having an effect on the lives of other people. The emotional written responses he has received from all over the world, when he posted his short video “How to be Happy,” both surprised and encouraged him. He began to see that there was mass appeal for his art. The fact that people have said that they cried or that the piece changed their life, “It really moves me,” Domroe said. “When I’m dead and I’m gone that’s still going to be around. There’re very few people that leave stuff behind like that.”

James Domroe’s “The Loneliness of Nature” multimedia exhibit will be on display at the Westcott Community Art Gallery until March 4. For more information on his work, including how to purchase his numbered canvases and prints (which are available for sale), visit www.wix.com/jamesdomroe/325films or email jamesdomroe@yahoo.com.