“Breathtakingly poetic, Lights delivers a spellbinding performance that is as tranquil as a lullaby and as mesmerizing as her lyrics.”
– StayFamous.Net 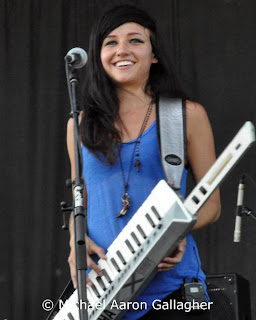 If word-of-mouth advertising is the best measure of the fans’ love for an artist, Lights is expected to amass quite an international following in the coming year.

Audiences may be drawn to her movie star beauty, but 22 year-old Canadian recording artist Lights (who was born Valerie Poxleitner) proves she is much more than a pretty face. With her unique blend of original lyrics, impressive vocals and synthesized pop music, she delicately crafts an emotionally intriguing musical story on the keyboard and keytar.

In addition to singing her popular song, “The Last Thing on Your Mind,” which currently has more than 2.5 Million plays on MySpace and was featured in an Old Navy television commercial, Lights also played other songs from her EP including “White,” “Ice,” and “February Air.” During her set, she explained that it was Russell, her Yamaha keytar’s “first show back” after being broken. (Fans will be relieved to know that Russell has been successfully repaired and appeared with her in a recent photo shoot.)

In one of the highlights of the four-day music festival, Lights also sang a duet with the band “Ten Second Epic” (who recently opened for 50 Cent and the Black Eyed Peas). According to the band, it was the first time the two had ever played their song “Every Day” together.

Following her concert, Lights graciously signed autographs under the hot summer sun and posed for pictures with fans. On Sept. 22, she will release her highly anticipated full-length album in Canada, followed by its release in the United States on Oct. 6.

For more information on Lights, visit www.MySpace.com/Lights, where you can listen to her music, learn about upcoming tour dates and add her as a friend.