Canadian actor and Grammy-nominated recording artist Drake, who is best known for his radio hit “Best I Ever Had” and his role on the television series “Degrassi: The Next Generation” has officially surpassed Kanye West for the most ticket sales at the annual Block Party concert at Syracuse University. Drake’s sold-out (9,791 tickets) show, drew 1,654 more people than West’s 2006 record-holding performance. 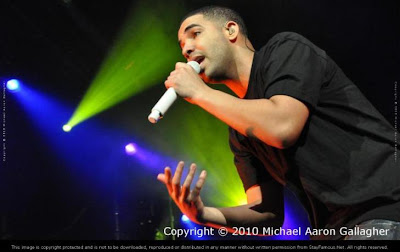 Drake performs in front of a record-breaking crowd at the Carrier Dome during the 2010 Block Party celebration at Syracuse University. Photo Copyright 2010 by Michael Aaron Gallagher of StayFamous.Net – All rights reserved.

The tour, which made a stop in Central New York on April 30, also featured special guest NERD (with lead singer Pharrell Williams of The Neptunes), who re-worked some of the lyrics to include “Syracuse” in their songs. 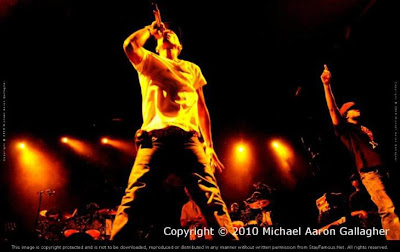 N.E.R.D. performs on stage in the Carrier Dome in “The Away From Home Tour.” Photo Copyright 2010 by Michael Aaron Gallagher of StayFamous.Net – All rights reserved.

According to University Union, the Syracuse University event is also the largest of those being played at college campuses around the country in “The Away From Home Tour.”

“Drake is who’s hot right now,” said Deniece Holley and Kevin Manley, co-executive directors of University Union Concerts. “The students have always favored hip-hop acts over other genres, so with this year’s most-talked about rapper headlining Block Party, the increase in ticket sales is somewhat expected. With NERD on the bill, it takes the show to a whole other level and really solidifies it as a historic Block Party.” 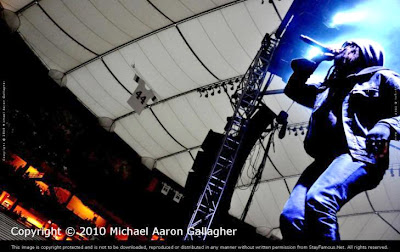 K-Os performs at the Carrier Dome for the student Block Party celebration. Photo Copyright 2010 by Michael Aaron Gallagher of StayFamous.Net – All rights reserved. 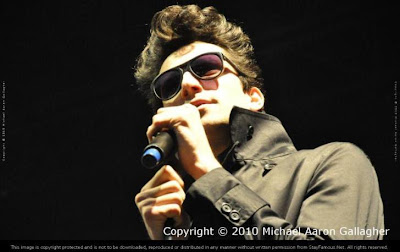 Francis and the Lights perform at the Carrier Dome in front of a sold-out crowd. Photo Copyright 2010 by Michael Aaron Gallagher of StayFamous.Net – All rights reserved.

“University Union prides itself on bringing a diverse line-up of programs and events to campus throughout the year,” Manley said. “In addition to weekly movie screenings, we host several pre-released screenings allowing students to see blockbuster films before they hit theaters nationwide.”

The co-executive directors said: “Students were really excited about the show. There was a ton of buzz about the possibility of Drake headlining before we even confirmed his slot. The buildup to the show was enhanced through promotions on and off campus, and at the end of the day, nearly 10,000 people showed up to make Block Party the event of the spring semester.”