Since the 1970s, Kansas has occupied the airwaves with their timeless classics like “Dust in the Wind” and “Carry On Wayward Son” (which is featured on the video games Rock Band II and Guitar Hero II). With multi-platinum selling records and a host of fans around the globe, the band continues to entertain crowds. 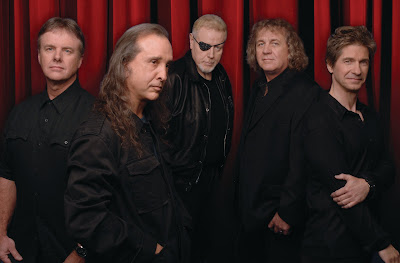 From left Phil Ehart, Bill Greer, Rich Williams, Steve Walsh and Dave Ragsdale.
I recently had the opportunity to ask guitarist Rich Williams about their upcoming concerts in Central New York.
Listen to a message from Rich Williams:

Michael Aaron Gallagher: “Have you spent any time in Central New York before?”

Rich Williams: “While we have played in the area several times in our 36-year career, we’ve only just passed through. That’s how life on the road goes.”

Michael Aaron Gallagher: “You’ll be playing both at Harborfest and at this year’s New York State Fair, will there be any differences between the two shows? And are there any surprises in store?”

Rich Williams: “We will be playing Kansas material at both shows, that’s what we do. As far as “surprises” are concerned, again, we will show up and do what we do. Are there any surprises is store for us? Phil really likes cake…”

Rich Williams: “I enjoy playing guitar period, but because of the crowd response, ‘Dust [in the Wind]’ and ‘[Carry On] Wayward Son’ are always exciting to play in front of an audience. Practicing them alone at home, not quite as exciting.”

Michael Aaron Gallagher: “How do you think you’ve changed as performers over the years?”

Rich Williams: “We’re much better players now. Practice makes perfect. Well, we don’t really practice all that much, so perfection is way off in the distance, but years of playing makes you more comfortable with your instrument.”

Michael Aaron Gallagher: “When people think of Kansas, what do you want your musical legacy to be?”

Rich Williams: “Kansas was a band. Not an act, not an artist, not a combo, not a stylish fad of the month… a band.”

Kansas will headline at Oswego’s Harborfest July 23 and return to Central New York Aug. 27 to play a concert at the New York State Fair.