“Frank, funny, and full of charm, ‘Port City’ will make you laugh, it will make you think, and when it’s over, it will leave you wanting more.” – StayFamous.Net

Coming off its recent debut at the Secret City Film Festival and the Cucalorus Film Festival in Wilmington, NC, “Port City” by writer/director Andy Brown is attracting national attention, not only for the terrific feature film debut of actress Jodie Sweetin (“Full House”), but also for its small-town charm.

“We got an amazing reception at Secret City Film Festival,” said Brown, “where the film placed second in the feature competition.” 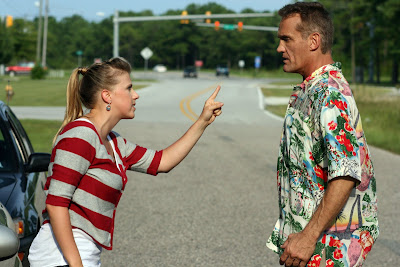 Actress Jodie Sweetin (left) makes her big screen debut as Nancy, the former mistress of George (right), played by actor John Wesley Shipp, whom she scolds for his repeated attempts to seduce her.

With a running time of 103 minutes, “Port City” (Willow Shade Productions) is a film about David (played by Matt Lutz), a small town waiter who is “reasonably happy,” but still seems to be lacking a sense of purpose and direction in his life. When a new acquaintance, Jason (Micah Shane Ballinger) moves into the empty bedroom upstairs, David’s life slowly begins to change. From his affair with a mysterious woman in town, played by Barbara Alyn Woods (“One Tree Hill”), to the love triangle involving Nancy (Jodie Sweetin), George (John Wesley Shipp) and Ray (Shaun O’Rourke), the film’s deeply intertwined plot illustrates how in life, everyone’s destiny is intricately connected.

In her role as David’s sister Nancy, Jodie Sweetin’s cinematic debut is beautifully executed. Sweetin, who is the author of the new book “Unsweetined” (available through Simon Spotlight Entertainment) is natural and comfortable in front of the camera, and it shows. “Port City” not only gives Jodie an opportunity to remind audiences of the comedic side of her personality, as she so effortlessly nails the timing of one-liners, but it also shows she can be a mature actress in a serious dramatic role. Her performance will no doubt attract the attention of other Hollywood casting directors. In this case, Sweetin is not simply making a cameo, she is playing a solid supporting role in the film.

The small town dramedy “Port City” is anything but ordinary. It is about how lives intersect, and how everyone’s life story is so brilliantly intertwined. Like a novel, the pace of the film is slower than many theatrically released films, but its tempo allows the audience to piece together the intricate plot and enjoy the relaxed, small-town rhythm of its characters.

Director Andy Brown does what so many Hollywood writers and directors are afraid to do – he creates three dimensional characters that operate in a place somewhere between stereotype and realism, allowing them to live in a fictional world, where their individual stories are not unnaturally summarized and neatly tied up with a bow at the end. Like a good novel, the film will leave you with questions. It will make you wonder what happens to the characters next. Where do they go from here? Who do they end up with in the end?