As the lights dimmed in the Grant Auditorium, countless Muggles eagerly waited in anticipation, not for a Quidditch tournament to begin or even for a chance to see the most famous young wizard of all, but instead to embark on a return to the legendary Hogwarts School for Witchcraft and Wizardry, along with a special guest who understood the true magic of Hollywood moviemaking.
For many Harry Potter fans this was not the first time they had seen “Harry Potter and the Goblet of Fire,” but on this occasion, there was someone in the audience who could give them a behind-the-scenes look at the process of composing the soundtrack for the fourth movie in the blockbuster franchise. 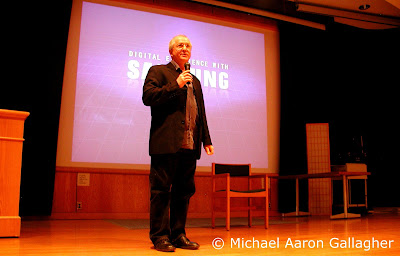 Composer Patrick Doyle discusses his work on the ASCAP award-winning film “Harry Potter and the Goblet of Fire” at a special screening in Syracuse, New York.

On Feb. 10, Syracuse University hosted a special screening of the Warner Bros. Pictures feature with guest, Oscar-nominated composer Patrick Doyle. At the event, which was sponsored by the Syracuse International Film Festival and the Bandier Program for Music and the Entertainment Industries (through the College of Visual and Performing Arts at Syracuse University), Doyle spoke about his creative vision for the score, as well as his background in other period films. Throughout his distinguished career, he has attended screenings across Europe, discussing his music with moviegoers from around the world. 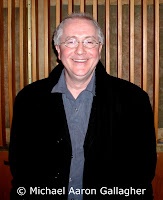 Twice nominated for a Golden Globe award, Doyle has a unique ability to enhance the picture’s emotive qualities without upstaging the characters or the storytelling. He seamlessly weaves the music in and out, creating excitement, building tension and suspense, and providing subtle hints of underlying romance. By adding a new intriguing dimension to the characters, he accents the overall visual effects, mood and tone of the picture.

Among his many talents, Patrick Doyle’s performance background as an actor particularly appealed to Director Mike Newell, who chose him to step into the role, replacing legendary Academy Award-winning composer John Williams for the fourth Harry Potter film.

“It was my opportunity to introduce some new themes to some characters,” Doyle explained, “the Voldemort character in particular.”

From the intensity that builds during “The Maze,” to the weightless, romantic cue that accompanies Hermione Granger’s walk down the staircase at the Yule Ball, the music of Harry Potter is itself an enchanting character that provides a new dimension to the story. Doyle also helped to create a darker tone for the picture, exploring the depths of despair during the haunting, ominous scenes depicting the return of the villainous Lord Voldemort, and the emotional melody played by the string section in “Death of Cedric.”

“The piece of music you see that accompanies the arrival of the Durmstrang boys… was the first music I wrote after Mike [Newell] had described the scene. He showed me the costumes and he said, ‘I want it to be very machismo. I want it to be strong.’” According to the composer, the suggestion for the use of staves in the scene came after Doyle saw a show with the dance troupe “Stomp.”

Being a part of the major motion picture can be time-consuming for many composers, who must often juggle their own unique inspiration within the constraints of the director’s vision for the project.

“It’s a difficult process.” Doyle said, “It’s a miracle that any film actually ends up on the screen.” Yet, it is through this delicate creative exchange that the real magic of filmmaking is eventually brought to life on the big screen.

During awards season, many people wonder how a movie score is evaluated by the show’s judges. Do they listen to the music independently, or do they compare it to the other nominees based on its intricate relationship with the film?

In an interview before the screening, Doyle provided firsthand insight into the process, “They are supposed to watch it in conjunction with the picture.” he said, “The album is sent out by the studios in order to let people hear it away from the picture, so they use both mediums to judge.”

With several projects currently in development, including an upcoming film with French director Régis Wargnier, as well as the release of four albums, including two with piano music, a string quartet and a children’s school orchestra, Doyle will likely continue to garner critical acclaim for his work.

In a remarkable music and acting career, Patrick Doyle has made a lasting contribution to cinema history with classical themes that will forever define some of Hollywood’s most memorable motion pictures.

The classical music soundtrack for “Harry Potter and the Goblet of Fire” is currently available. For ticket information about upcoming 2009 Syracuse International Film Festival events (Apr. 24-May 3) and to sign up for email updates, visit: www.syrfilm.com.

Also published by Scotsman Press, Inc. (Reprinted with permission)
To request permission to use excerpts from “Stay Famous by Michael Aaron Gallagher” or to quote StayFamous.Net on television or in print please contact Manhattan Public Relations.