‘Famous in 31 Days’ steals the show

“‘Famous in 31 Days’ steals the show”
By Michael Aaron Gallagher

“‘Famous is 31 Days’ is an entertaining, surprisingly funny, cross-country adventure. A must-see documentary film for anyone who’s ever dreamt of being famous.”
– StayFamous.Net

If there’s one thing that people in almost every culture around the world share, it is an innate desire to be popular among our peers. At some point, whether we admit it or not, we all wonder what it would be like to have the doors of opportunity open for us, simply because of who we are. To be showered with gifts and to be adored by complete strangers. To be recognized at the mall or grocery store and asked for our autograph, or to meet the athletes and celebrities we have always idolized.

The reality of fame is far more complex than simply living a glamorous lifestyle filled with excess wealth and popularity. For many, it takes years of hard work and dedication to their craft to ever achieve the public recognition they desire.

One man, decided to leave the security of his job and the promise of stability behind to pursue his dream of becoming famous. And the real challenge was he had to do it all in 31 days or less.

At the 2009 Syracuse International Film Festival, John Gerard explained how his documentary film, “Famous in 31 Days” changed his life and ultimately helped re-shape his destiny. 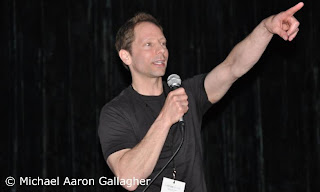 John Gerard answers questions from the audience at the
premiere of his new documentary “Famous in 31 Days.”
The Filmmaker

When I first saw John Gerard, he was on the Channel 5 evening news in Syracuse, New York. Like many local television personalities, Gerard didn’t stand out to me, and I barely recognized his name. Nothing separated him from the countless other people in the media who rotate in and out of the local news stations each year. But there was a reason for that. He wasn’t living up to his full potential and he knew it. He wasn’t satisfied with where he was in his life, and while audiences saw him enjoying a successful, prosperous career, there was a voice inside telling him to do something more.

Months later, the John Gerard I saw on screen at the Syracuse premiere of “Famous in 31 Days,” and the man who spoke to the audience that evening about his experiences, was not the same guy that appeared stifled by conformity and mediocrity on the evening news each night. This newly discovered entertainer was genuinely funny, charismatic and confident.

So what changed him? In his quest to be on the “Tonight Show” with Jay Leno, John Gerard literally stopped forcing himself to live a life that confined who he was and defined who he would become, and took charge of his future.

“Famous in 31 Days” is a true lesson in being yourself, following your heart and facing your fears. It is hands down the most entertaining documentary I have seen this year.

With the charisma and personality he showed in his film, there is no doubt Gerard could be an influential motivational speaker to young people around the country. His inspirational story has far more substance than the film’s premise would suggest. In fact, “Famous in 31 Days” is as much a social commentary and a study in sociology, as it is the tale of one man’s journey to fame.
For more information on how you can obtain a copy of John Gerard’s documentary, visit http://www.famousin31days.com/.