It’s not everyday that I cross paths with a beautiful Hollywood actress. So when I heard from Pleasant Wayne, I jumped at the chance to interview her about her career, her aspirations, and her charity work. 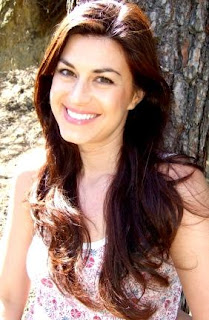 Pleasant Wayne: “My parents put me in ballet classes, when I was 3 or 4…. that is when I realized that eyes were watching me and so I took advantage! My first play came in 5th grade, it was called “Wheels” – it was about Cavemen…. I’m still waiting for one to club me and drag me into his cave.”

Michael Aaron Gallagher: “What made you want to work in Hollywood?”

Pleasant Wayne: “Great question! I’m a bit of a gypsy when it comes to jobs. I’ve had just about every job you can imagine….administration, marketing, waitress, retail, child care and everything in between. The allure of Hollywood is that it lets you get lost in someone else’s life and personal situations for a bit, however, it’s imperative to remain true to yourself and work very hard for what it is you believe in. When I get opportunities to recreate a reality for the soul purpose of entertaining people, there is a sense of accomplishment that no other job has given to me.”

Pleasant Wayne: “Plus, there are other really fun benefits like getting your hair and make-up done by skilled artists, getting to wear clothing you might not have otherwise worn, and befriending some really creative and nurturing people. I’m really excited about the opportunities that will come, to showcase designers who are using environmentally-friendly ingredients and materials – it’s the aspect of having purity in beauty that I believe in.”

Listen to a message from Pleasant:

Michael Aaron Gallagher: “You’ve appeared on TV shows like ‘Alias,’ ‘Entourage,’ and ‘CSI: NY.’ What show would you like to guest star on next?”

Pleasant Wayne: “Television is wonderful. So many actors landed great guest starring roles before going on to star in movies. In fact, just before Brandon Routh landed the part of Superman in Superman Returns, he and I were working as event bartenders at all kinds of events around town, and before that he did a character on ‘Will & Grace.’”

Pleasant Wayne: “I really like ‘Family Guy’…do animations count? I saw Seth MacFarlane at lunch recently and thought it would be really fun to work with him acting behind animated characters….plus it would be pretty ‘Eco’ of me…I could just call in from my bed and deliver the lines….no fuel burned to drive to the studio!”

“There are some interesting Green living shows I would love to be on. ‘Grey’s Anatomy’ would be good…I would bring the writers an organic fruit basket every day to show my unyielding appreciation.”

Michael Aaron Gallagher: “Do you have a favorite television show?”

Pleasant Wayne: “But of course! ‘Sex in the City’ – I am definitely a little of all four of those brilliant ladies…. you can call me CarrieMirAnthaLotte.”

Michael Aaron Gallagher: “Is there an ideal movie role you would like to play?”

Pleasant Wayne: “Oh yes! I would LOVE to do a period piece with Leonardo DiCaprio. He busted out some really great accents once and I couldn’t stop laughing. It made me realize how important ‘range’ is in this industry as far as staying power goes, and he’s definitely got it.”

Michael Aaron Gallagher: “You’ve done some modeling work in print advertisements. Do you think being a model has helped prepare you for working in front of a TV camera?”

Pleasant Wayne: “Absolutely! So much of film and television acting is about precision. Many people are unaware of the time it takes to get the perfect shot. A three second scene can take hours to shoot. Modeling disciplines you to be still and to repeat, as well as be comfortable with people looking at you…studying you.”

Michael Aaron Gallagher: “Would you ever consider doing television commercials?”

Pleasant Wayne: “I would. However, I am so dedicated to promoting products and services that are health conscious and environmentally friendly, so I would always keep that in mind. It doesn’t always go your way though…. sometimes you take what is offered to you with gracious acceptance and then go from there.”

Michael Aaron Gallagher: “What would you say is the most important thing to you at the moment?”

Michael Aaron Gallagher: “You’re involved in environmental causes. Tell me a little about the Global Green Pre-Oscar Party and The 11th Hour Premier you attended.”

Pleasant Wayne: “I had the pleasure of attending the Global Green Pre-Oscar parties in 2007 and 2008. They were both really exciting and I learned quite a bit more about the Environment.”

Pleasant Wayne: “In 2007, I went as the official spokes model for OneCan.org. Global Green invited us, as we collect recyclables from studio sets and donate them to the homeless in Hollywood. Not only is it an environmental charity, but it’s a local outreach program as well. That night, I spoke with Orlando Bloom, James Blunt, and Chevy Chase, but got a little shy when Leonardo and I locked eyes.”

Pleasant Wayne: “Then, in 2008, I attended the bash doing some reporting for Ecorazzi – the ‘green’ paparazzi. It was just as fun – spoke with some really great stars, who are doing what they can to spread awareness about keeping the planet safe and comfortable.”

Pleasant Wayne: “I became a member of the NRDC in 2007, and was invited to the premiere of The 11th Hour, an environmental documentary. By the end of the film, I was in tears. Tears of sadness and joy. The 11th Hour, touches on so many important points that impact our daily living. People will be awakened when they see it, if they haven’t already.”

Pleasant Wayne: “I have always been a bit of a scientist, as far as beauty goes. My aunt bought me a little natural perfume mixing kit when I was little and my father is a Chiropractor, so I’ve always been intrigued with using natural ingredients on the body. I love when you can use simple and healthy ingredients for many things. For example: you can use organic vinegar as a powerful exfoiliant on your skin, and in many healthy food and drink recipes, and you can clean almost anything with it!”
Pleasant Wayne: “The Campaign for Safe Cosmetics is an excellent resource for checking toxin levels in your skin and hair care products. Honestly, the billion dollar beauty industry creates much more havoc than harmony, in my opinion. You have highly retouched photos of models, selling products that contain very harmful chemicals, to men and women who feel like they need them to look better, made by companies who are responsible for a large percentage of the pollution in the air, land, and water sources. It just doesn’t make sense to me.”

“The age old saying of ‘beauty is within’ are words to live by. Sure, skin care, makeup and hair care are important factors in helping us feel better about ourselves on the outside, but we have to have that solid foundation within first.”

“I love watching make-over shows! The men and women’s lives transform to new heights when their appearances are enhanced. Just be sure that we are enhancing ourselves safely and without unnecessary harm to the earth.”

Michael Aaron Gallagher: “If you could convince people to do one thing differently, to help the environment, what would it be?”

Pleasant Wayne: “There are a zillion simple things we can do. I think one of the most simple and important things we can do is to start supporting local Organic farming. Buy vegetables and fruit and anything else that is grown locally and plant your own gardens. This benefits people’s health, creates a sense of unity within communities and it eliminates pollutive shipping costs. Truck drivers can turn into farmers and spend more time with their families instead of on the roads!”

Michael Aaron Gallagher: “Do you have any advice for struggling young actors in Hollywood?”

Pleasant Wayne: “Yes – don’t drink and drive. REALLY know yourself and be good with that knowledge and if job decisions and situations don’t sit right inside – listen to yourself. Actors rely on instincts…use them!”

Michael Aaron Gallagher: “If you could sit down and have lunch with anyone, who would it be?”

Pleasant Wayne: “At this point in my life, it would be Mr. and Mrs. Scorsese. Sometimes, I will be asked what my favorite movies are, so I will list them off, and over half turn out to be Scorsese films…the man knows how to create “mood,” and his movies are the arenas I want to play in.”

Pleasant Wayne: “I’m going to keep doing what I am doing and loving myself a little more everyday.”

For more information on Pleasant Wayne, visit: http://www.pleasantwayne.com/ or contact her agent: