The City of Syracuse is once again becoming a world-renowned player in the motion picture industry, as Hollywood studios, directors, actors, and international producers weigh the benefits of shooting films in Central New York. With its wealth of local talent, and a reputation for being an inexpensive, creative, and inviting place to make movies, Syracuse is a city where filmmakers from around the globe can join forces to bring their ideas to the big screen.

On Oct. 10 through 12, the B-Movie Film Festival was held at the newly renovated Westcott Theater and Performing Arts Center. The three-day motion picture event received 250 film submissions and featured a final list of more than 30 low-budget independent films, shorts, animated movies, documentaries, and foreign pictures, many of which have yet to receive distribution deals. 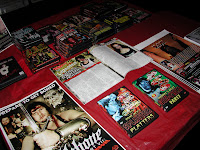 Filmmakers from across the United States and Canada gathered at B-Fest to screen their projects and talk about the movie-making process. Some of the notable attendees included Broadway Actress Nicole Lewis from the musical “Rent.” Following the screening of her new film, “London Betty,” Lewis discussed her recent guest starring role on “Law and Order: Special Victims Unit,” and her upcoming return to Broadway in the production of “Hair.”

The B-Movie Film Festival illustrates the growing opportunity for filmmakers of all experience levels to showcase their work in Central New York theaters. What makes the yearly event so special is that it serves as a kind of “Academy Awards” for independent filmmakers, who may not have otherwise had the exposure to compete with big-budget Hollywood productions. From animated short films to horror movies, dramas, and documentaries, the B-Movie Film Festival gives audiences a chance to see something that the traditional movie-going experience just cannot provide. Best of all, it serves as a forum where people can interact with the filmmakers, share their advice and filmmaking secrets, and get a behind-the-scenes look at how the movies were made.

In recent years, Syracuse has undergone a cinematic renaissance that is not only generating money for the local economy, but it is also bringing in celebrities, excitement and fun. The new Syracuse Film Office, which officially opened on Sept. 1, 2008, is just one of the many resources filmmakers now have in the region. Independent film distributor SRS Cinema, which produced “Clay,” a full-length, feature film shot in Central New York (starring local actors Tom Minion, Emma Koziara, Jennie Russo, and Gerrit Vanderwerff) is helping to bring about events like the B-Movie Film Festival and attract moviemakers from around the world.

Syracuse Filmmakers are also receiving special recognition for their work. Among the local talent attracting national attention is Sean Cunningham, who recently won the Grand Prize in the “I Love New York Film Competition,” and Director Ron Bonk, who organized the B-Movie Film Festival, and received critical acclaim for his award-winning indie film “Clay.”

Much of the progress in the entertainment industry is being made possible by new legislation that increases the tax credits available for projects that meet the eligibility requirements. New York State is once more becoming an ideal location to produce feature films as Governor Patterson signed an increased tax credit into law on April 23, 2008. According to the New York State Governor’s Office for Motion Picture and Television Development, “The New York State Film Production Credit program provides a refundable 30% tax credit for qualified feature films, episodic television, pilots, and television movies/miniseries.” (http://www.nylovesfilm.com/) 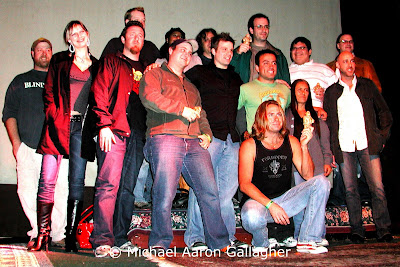 2008 B-Movie Film Festival Filmmakers
Some of the Benefits For Filmmakers in Syracuse Include:

The diversity of movie projects being filmed in Syracuse, the varied landscape, the local production talent, and the cooperation of city government to invite these projects to the area and to actively support the economic and cultural contribution they make to the community is reshaping the Syracuse entertainment industry and bringing exciting new ideas and stories to the big screen.

For details on submitting your film to the B-Movie Film Festival or for ticket information, visit: www.bmoviefest.com. Also, look for details on the upcoming 2009 Syracuse International Film Festival, to be held April 24 – May 3, 2009, at www.syrfilm.com. To learn more about the history of motion pictures in Central New York, read the fascinating new book by Norman O. Keim called, Our Movie Houses: A History of Film & Cinematic Innovation in Central New York (available through Syracuse University Press).

« The Status: ‘So This is Progress’ Album Review » 5 Australian Actresses You Should Know