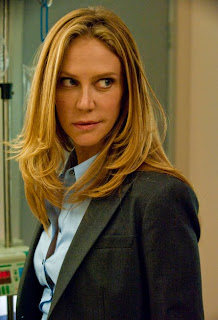 Ally Walker is best known for her role as Dr. Samantha Waters on the NBC drama “Profiler

,” but this season, she’s keeping fans on the edge of their seat with her portrayal of Agent June Stahl in the FX original series “Sons of Anarchy

.”
Born in Tullahoma, Tennessee, Walker studied biochemistry before eventually getting her big break in Hollywood. Her acting career in television and film has included roles on “CSI: Crime Scene Investigation

,” “While You Were Sleeping

,” and most recently the biker drama “Sons of Anarchy

.”
In its third season, “Sons of Anarchy

” boasts a diverse cast of relative newcomers and Hollywood veterans that includes Katey Segal and Hal Holbrook. From the streets of California to the war torn alleys of Ireland, leaders of a notorious small town biker gang “Jax” (played by Charlie Hunnam) and “Clay” (played by Ron Perlman) are on a quest to reclaim their legacy in a world of “money, power and blood.”
I recently had the opportunity to speak with Walker about her role and some of her favorite moments on the show so far.

Michael Aaron Gallagher: “What do you think makes ‘Sons of Anarchy

’ such a unique show?”
Ally Walker: “There’s the obvious sort of bad-guy element, bad-boy element that everybody wants to be a rebel and sort of a renegade and bikers sort of epitomize that, but I also think that the soulfulness and the sort of family bonds that these people have—the way they watch each other’s back—is a very old-fashioned notion, if you will. Maybe not old fashioned but it’s a romantic notion. You don’t really see a lot of that anymore. It’s become much more of a narcissistic society where it’s the loners are there for themselves and people don’t hang together. This is really a wonderful family. They all take good care of each other. There are codes that they live by that are very honorable. I think that really appeals to people, especially in tough times having, knowing that people have your back and they definitely do.”
Michael Aaron Gallagher: “Is there a scene that you’re particularly proud of?”
Ally Walker: “Yes, there’s a few scenes. I think the writing on the show’s been pretty good. I think it was season one right before “Donna” died, where I’m interrogating “Opie,” and I’m just kind of screwing him over. I’m just doing it with sort of this relishing. Then there’s the interrogation scene when ‘Jax’ was in prison, which I really like because he kind of came right back at me. Of course, I love the scene with Katey in the 7-Eleven, where I’m stepping over the agents and confronting her.”
“I think what I like about the character, what Kurt writes, is that there’s just a lot of—he does this is sort of black comedy with my character, which is just so great because it just spices everything up and it makes it really fun to try to hit those. But I’ve liked quite a few of the scenes.”
One thing is for sure, fans can expect a few more surprise, jaw-dropping moments to come.
“Sons of Anarchy” airs at 10 p.m. Tuesdays on FX. Click here to buy

season three of “Sons of Anarchy