The one short film you won’t want to miss

Every now and then a movie comes along that you can’t wait to share with your friends. This year, that film happens to be the entertaining 20-minute short, “I Kicked Luis Guzman in the Face,” which was recently screened at the 2008 B-Movie Film Festival in Syracuse, New York. 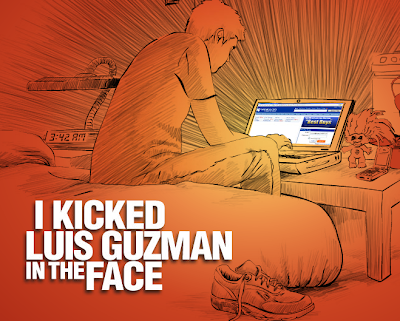 This is a solidly made production that carries through to the very end, even demonstrating its creativity in the way the movie’s final credits are displayed. The entire cast and crew deserves praise for bringing an original concept to the big screen and producing a movie you will not soon forget.

And although the film may have a surprise ending, it is dare I say, heartwarming?

To purchase a copy of the DVD “I Kicked Luis Guzman in the Face” and support the filmmakers visit http://www.ikickedluis.com/ or email guzman.film.info@gmail.com to find out how to get a copy.
“The one short film you won’t want to miss”
Copyright © 2009 by Michael Aaron Gallagher
Photograph: Courtesy of Sherwin Shilati and Adam Hendricks

« Five Canadian Actresses You Should Know » The Vox Jaguars: Clawing their way to the top