Syracuse, NY – After dinner, Fred Mascherino made his way back to the Lost Horizon, the club where his band Terrible Things was scheduled to play later that night. While the opening act was getting ready to perform, he headed backstage in search of the green room to do an interview. 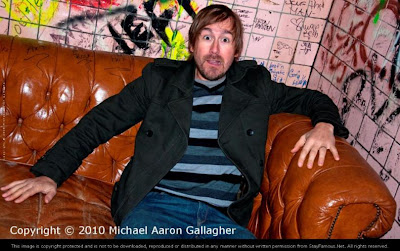 “We all pretty much left our bands at the peak of their success,” Mascherino said. “My last tour with Taking Back Sunday was with Lincoln Park. Our third album had just gone gold… I had all the reason to stay but I just wasn’t happy.”

After leaving Taking Back Sunday, Mascherino set out on his own, playing acoustic guitar in smaller venues. Despite the freedom of being a solo artist, he missed the collaborative chemistry of working with a group.

When the opportunity arose for him to play with his “favorite drummer in the world” (Josh Eppard) and form Terrible Things along with Andy Jackson, they recorded some demos in Birmingham, Alabama with Jason Elgin and began to explore their options with three record companies. According to Mascherino, they chose Universal Motown because they seemed the most excited about their music and its potential to reach a radio audience.

“We just came out with our video for ‘Revolution,’” Mascherino said. “And it’s been climbing the charts. It seems like people at radio are liking the song.”


The band’s self-titled debut is a concept album inspired by a series of fires that devastated his hometown. Alternative Press recently gave the album a 4.5 Star review.

“It’s been great,” Mascherino said. “We’ve all made records before in other bands, so when we did this one we wanted to take our time and get it right… and I’ve found that people can hear that when they put it on. This music comes from a real place.”

With a degree in jazz, which Macherino says gave him an excuse to play guitar eight hours a day, his background allows him to quickly arrange music and to understand scales, rhythm and what will and won’t work when he’s adding a second guitar part to a song.

“I still feel like I’m writing the same songs I wrote when I was in high school,” Mascherino said. “They’re still coming from the same place, the same point of view – the way that I like to tell a story.”

Terrible Things is scheduled to play holiday shows in the northeast, and will go on tour with Bayside in the new year.

“Our goal as a band is to bring the rock back.” Mascherino said. “We have guitar solos in every song. I hope we can keep doing that and keep being a live band that people want to see.”

To find out more about Terrible Things, including upcoming concert dates visit www.myspace.com/terriblethings.