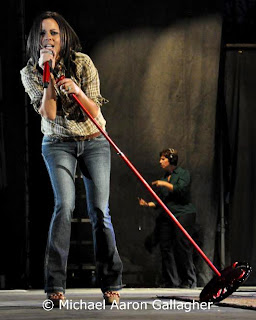 As one of People magazine’s 50 most beautiful people, a former contestant on the ABC hit television show “Dancing with the Stars,” RCA Records Label (Nashville) recording artist Sara Evans is as much known for her beauty as she is for her country-girl charm.

Performing a mix of songs (her Greatest Hits album is available now) and familiar favorites, Evans treated the audience to a bit of what it’s like to be a country music singer.

During the show, she talked about her marriage last summer to Jay Barker, a football player, and joked that the combined family means, “We have like 50 children together.” Evans also mentioned her recent move from Nashville, Tennessee to Birmingham, Alabama.

“I’m a country girl to the core,” she told the audience.

Despite the sometimes “chaotic” lifestyle associated with her career and life in the spotlight, she described herself as low-maintenance, being able to get off the plane in New York at 7 p.m. and start her show an hour later. 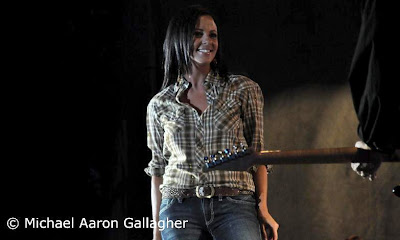 In one of the highlights of her concert, she performed the Dolly Parton song, “Jolene” along with her two younger sisters Lesley and Ashley, who harmonized acapella for much of the opening.

For more information on Sara Evans’ music, including tour dates and more about her upcoming album visit http://www.saraevans.com/.