A woman abandoned at a gas station is offered a ride from a complete stranger. Meanwhile, a serial killer is on the loose. Does she accept the ride?

If you can make it through the opening scenes (which are admittedly slow and have a film school quality to the imagery) you may just find yourself caught up in the story, wondering who will survive and who will perish, in this intelligent, and puzzling mystery.

Written and Directed by Claude Lelouch “Roman de Gare” is like a good novel. If you are used to big-budget Hollywood movies, it may at first seem like taking a cold shower on a hot summer day (to become comfortable with the French subtitles and foreign locales), but the story-telling and even some of the shots in the film are well-executed and worth waiting for.

Both Dominique Pinon and Audrey Dana give solid performances in the lead roles. In fact, Pinon’s character is so effectively creepy you can’t help but watch to the end. 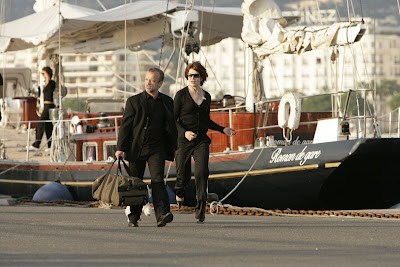 Dominique Pinon as Pierre Laclos and Fanny Ardant
as Judith Ralitzer in Claude Lelouch’s “ROMAN DE GARE”
“Roman De Gare” is about Judith Ralitzer (Fanny Ardant), a best-selling author who becomes entangled in a web of deceit, as she tries to cover up the fact that her novels are written by a ghost writer with extraordinary abilities. When her life intersects with the other characters, including Huguette (Audrey Dana) the movie begins to take on a new form, becoming even more mysterious.

And if you’re sure you know how it’s going to end, you may be surprised. After all, a good movie review never reveals the secrets of the film.

“Roman De Gare” was reviewed at the Manlius Art Cinema (Manlius, NY). For more information on other films showing at the theater call (315) 682-9817 or visit them online at manliusartcinema.com.
“Roman De Gare” Movie Review
Copyright © 2008 by Michael Aaron Gallagher
Photographs: Courtesy of Samuel Goldwyn Films
To request permission to use excerpts from “Stay Famous by Michael Aaron Gallagher” or to quote StayFamous.Net on television or in print please contact Manhattan Public Relations.