Imagine a world where anything is possible, a place where everything is imagined, and nothing is beyond the realm of your creativity. When Computer Generated (CG) animation emerged, it revolutionized the way we watched movies. It brought the world of cartoons and 3-D special effects to life with stunning realism. And for filmmakers, it made telling the story a whole new adventure. 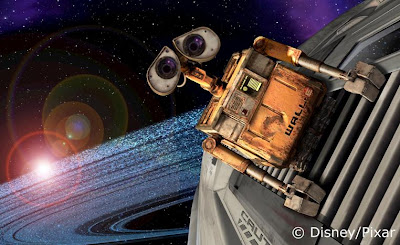 Disney/Pixar’s “Wall-E” (2008)
On Friday, May 2 representatives from Pixar Animation Studios held the “New Technologies in Animation Forum” at the 2008 Syracuse International Film Festival. The two-hour event, hosted at the Museum of Science and Technology (Syracuse, NY), featured a behind-the-scenes look at some of Disney-Pixar’s most memorable feature films. From “Ratatouille” (2007) to the movie trailer for the newly released film “Wall-E” (2008), the forum showed a side of the production process that few people truly understand.
The Event
For the second year in a row, every seat in the Bristol IMAX Omnitheater at the Museum of Science and Technology was filled by area high school students, as well as the general public. Students from Greater Syracuse Area schools including Heninger, Corcoran, Fowler, Nottingham, and Fayetteville Manlius were in attendance. New York State Assemblyman William B. Magnarelli, who helped bring about the event (with the help of a grant), spoke to the audience saying, “animation is the perfect combination of art, creativity, and technology.” 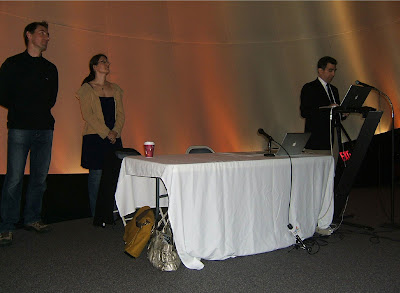 Magnarelli pictured with Dylan Brown, Supervising
Animator for Pixar, and Cynthia Slavens, Post-Production
Supervisor for Pixar at the MOST on Friday, May 2, 2008.
This year’s special guest speakers from Pixar, Dylan Brown (Supervising Animator) and Cynthia Slavens (Post Production Supervisor), discussed the process of making animated feature films and working for one of the top studios in the world. They also provided the audience with an amusing slideshow of the company’s offices in Emeryville, California.

About Pixar Studios
It doesn’t take long to realize that Pixar is a place where anyone in Hollywood would want to work. The company prides itself on having fun and being creative. From a “battle of the bands” competition between departments, to cubicles designed by the animators themselves, they have created a customized office environment that is made for learning and collaboration. They

even provide their employees with an assortment of “free cereal,” to make their workday feel just a little more like home.

But when it comes to the production process, Pixar isn’t playing around. Their high-tech digital projection theater (complete with sound provided by THX Ltd.) is a state-of-the-art facility designed to provide the very best viewing experience for actors, directors, and animators.

The Animation Process
The process of making an animated feature film like “Ratatouilli” can take years to develop. From the initial idea, to the treatment and script, each stage in the process adds a layer of complexity, as the tale makes its way from storyboard to the final rendering of the film for theatrical release and eventually DVD, Blu-Ray, Cable TV, Video-on-Demand, and a host of other formats for international markets.

All along the way, animators are working to ensure that there is the right balance of realism with the creative license to imagine something truly unique, original, and out-of-the-ordinary.

Dylan Brown (Supervising Animator at Pixar) discussed the way filmmakers study movement and the human form. He described the intense research that animators used when creating “Ratatouille,” even going so far as observing real chefs in their restaurants to understand the nuances of their work. In the end, he said, “You have to understand it, before you can recreate it.”

From the “triangle motif” that runs throughout the film, to the authenticity of the spoons, every detail in the creation of “Ratatouille” was closely scrutinized. Did you know for example that Remy’s shape was inspired by the 1990’s rapper, M.C. Hammer’s parachute pants, or that 15 shots in the theatrical version of “Ratatouille” were modified for DVD release, because the wine bottle wasn’t accurately represented in some of the scenes?

Disney/Pixar’s “Ratatouille” (2007)
The “New Technologies in Animation Forum” at the Syracuse International Film Festival is a fascinating annual event that brings some of the best creative minds in Hollywood, together with people from all over the world, who share a genuine love for cinema.

For more information on the Syracuse International Film Festival and the “New Technologies in Animation Forum,” including ticket information and how you can become involved, visit: http://www.syrfilm.com/.

« National Geographic’s “Manmade: Secret History of the Bra” is an Informative Documentary » 10 Secret Tips on How You Can Stay Famous at Home, Work, or School