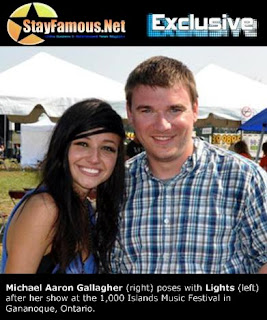 “If you only buy one album this year, “The Listening” by Lights should be that album. No new recording artist has impressed me more with their overall creativity, originality and one-of-a-kind personality. ‘The Listening’ is an emotional, passionate, and melodic debut by a truly extraordinary musician.” – StayFamous.Net

As I stood in the hot afternoon sun, beneath the front of the stage at the 1,000 Islands Music Festival in Gananoque, Ontario, with my camera in hand, I paused and stopped shooting. In that moment, it was more important to me to listen than to capture the perfect image.

A fellow photographer told me I should hear up-and-coming Canadian singer/songwriter Lights (formerly Valerie Poxleitner), and instead of taking a break for lunch, I decided to photograph her concert.

As a journalist, I knew I was only permitted to take pictures during the first two songs, before I would be whisked away from the front, but as I stood there with time running out, I couldn’t help but be completely mesmerized.

The performer I saw before me that afternoon was deep and mysterious, like the morning sea after a storm. There was passion and pain, innocence and illusion in her music. I was instantly transfixed by her ability to blend soft, poetic lyrics with an engaging electronic sound.

When her concert was over, I wrestled with decision of whether or not to go up to her and say something. Should I ask her for an interview, or talk to her about her songs? I eventually decided not to say anything at all, other than to ask for her autograph and pose for a picture with her. I had too many questions and it wouldn’t have been fair to her to interpret her music so hastily.

Now, months later, my only regret is not saying something. When you cross paths with someone extraordinary, don’t let the moment pass you by.

The debut full-length CD by Lights, entitled “The Listening” (now available on Sire Records, a Warner Music Group company) is flawless. From the catchy verses in “Savior” and the inspirational lyrics found in “Face Up,” to the beautiful piano ballad of “Pretend (Reprise),” the album illustrates the power of pop music to be rich with texture, meaning and symbolism. It is an album you can play over and over again and find something new each and every time.

Lights is not simply a pop singer who makes dance music, she is an artist who has created an album that redefines the electro-pop genre with lyrical complexity. In additition to her popular song, “The Last Thing on Your Mind,” which was featured in an Old Navy television commercial, “The Listening” also includes “Ice,” “February Air,” and one of her best songs, “Drive My Soul.”

One thing is certain, if Lights schedules a concert in Syracuse, NY, you can expect me to attend. But the next time I see her perform, I won’t be bringing my camera. I will be listening.

Tracks on “The Listening” include:

For more information on the music of Lights visit http://www.iamlights.com/.