For three days a week, television personality Lenay Dunn leaves her home in Nashville, to fly to New York, where she hosts the MTV show “10 on Top.” Born in Africa, where she lived until she was three years-old, Dunn grew up in Minnesota and eventually moved to Tennessee.

After making YouTube videos with her friends in high school, and passing out Red Bulls

in college during the summer, she caught the eye of executives at the company’s headquarters in Los Angeles, who decided to have her host shows, attend events and interview athletes to promote the energy drink.

Eventually, Dunn submitted an audition tape to MTV, where she landed the job as the host of “10 on Top.”

“I think I’m a little bit quirky,” Dunn said in a recent telephone interview, “it kind of works in my favor sometimes.”

While she described her upbringing, she joked that she was currently living in the Tennessee jungle (and played rainforest sounds in the background as proof).

It’s hard not to fall in love with her charming, quirky personality. Lenay said she enjoys drinking tea (although she admits she can’t do a good British accent), likes wearing shorts and tights (although her Twitter bio still says dresses), and she hopes to someday live in a house of windows (yes, a glass house).

As a TV host, some of her favorite moments include the time she went sailing with Zac Efron (“High School Musical

”) and when Ken Jeong of “The Hangover

” co-hosted one of the shows with her. 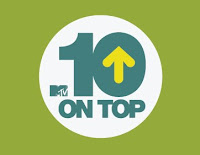 “Hanging out with him before and after the show was so funny,” Dunn said. “I get to meet some really cool people, and that’s definitely my favorite part.”

According to Dunn, the celebrity countdown show “10 on Top” recently changed its set and began using a green screen to project its virtual stage.

“I wish it was really my room in real life,” Dunn said. “Because there’s a bed in it and a TV and it looks like I’m just chillin’ in a really sweet space.”

Whether she’s on set bringing in cupcakes for the crew to celebrate a birthday or anniversary, or staying with the editing team, producers and script writers until the early hours of the morning to finish a show, her carefree sense of humor both on-camera and off is winning over fans and helping her live her dreams.

“My wish for this job is that it lasts like 20 million years, just forever,” she said. “And then at the same time I would love to… create other shows too, even if I’m not on them… to have my hands in all aspects, all sides of producing, that would be my ultimate goal.”

Wherever she may live, a glass house or the Tennessee jungle, there is no doubt her drive to achieve her dreams will propel her there (and the Red Bull

will certainly give her wings).