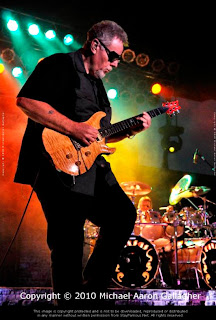 (Syracuse, NY) – With timeless classics like “Dust in the Wind

” and “Carry On Wayward Son

,” and their experienced musical prowess displayed on guitar and violin, Kansas played to a large crowd at the 2010 Great New York State Fair, proving that after more than 35 years, they are still going strong.

In a recent interview, guitarist Rich Williams told me about his favorite songs to perform live.

“I enjoy playing guitar period,” Williams said, “But because of the crowd response, ‘Dust

’ are always exciting to play in front of an audience. Practicing them alone at home, not quite as exciting.”

The State Fair marked the second time this summer that the band has played in the Central New York area. In July, they also headlined a show at Oswego’s Harborfest.

For many fans, seeing the band live also gave them the opportunity to purchase Kansas t-shirts, CD’s (like their recent album “There’s Know Place Like Home

,” which features some of their most popular songs re-recorded with an orchestra) and other merchandise.

Since the 1970s, Kansas has occupied the airwaves with multi-platinum selling records. Their songs have even been featured in video games like Guitar Hero II

, exposing a new generation to the music that so many have grown to love.

When I asked Williams what he wants the legacy of Kansas to be, he replied, “Kansas was a band. Not an act, not an artist, not a combo, not a stylish fad of the month… a band.”

Yet, it seems that after more than three decades of making music that has stood the test of time and struck an emotional cord with listeners, they are more than simply a band, and will be remembered as something far greater.

For more information about Kansas visit: www.kansasband.com. Their songs are also available on iTunes.