Story and photography by Michael Aaron Gallagher of StayFamous.Net 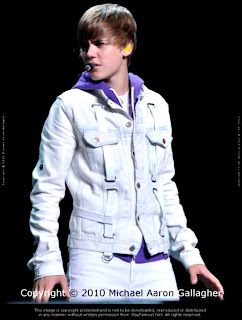 (Syracuse, NY) – They say the best things come to those who wait and for fans of 16 year-old Canadian pop sensation Justin Bieber, the wait must have seemed like an eternity.

In the early morning hours of Aug. 29, State Fair officials announced that the singer’s “My World” Tour scheduled to make a stop at the grandstand later that day, was being rescheduled to Sept. 1.

But all the commotion surrounding the schedule change during the midst of the back-to-school rush, which now put his show on the same day as country music group Lady Antebellum, couldn’t dampen spirits. The combination of the two shows helped propel the daily attendance of the fair to 97,254 people.

When Bieber finally hit the stage that evening, all the uncertainty surrounding his visit was drowned out by a wave of impassioned screams.

And she certainly wasn’t alone. The grandstand crowd, according to New York State Fair Director of Public Relations Fred Pierce, was approximately 17,000.

During this year’s grandstand performance Bieber sang some of his most popular hits including, “Baby,” “Somebody to Love,” and “One Less Lonely Girl.”

After the show, Bieber later tweeted, “Had a great time in Syracuse 2nite.”

This summer’s concert was his second recent show in the city of Syracuse. Last year he performed at the “Family Friendzy” festival in downtown’s Clinton Square.