Julianne Hough: Dancing with a Star

“Julianne Hough: Dancing with a Star”
by Michael Aaron Gallagher

Dancing with the Stars is making everyone famous. Stars long forgotten by the Hollywood limelight are now re-emerging brighter than ever. Even the dancers and judges are getting a taste of all the attention.

As a new season of ABC’s Dancing with the Stars hits the airwaves with a two-night premiere starting on March 17, 2008, one dancer continues to captivate television audiences.

Two-time champion, Julianne Hough has both the talent on the dance floor and the charismatic personality to charm audiences. But Julianne is not like a lot of her fellow competitors. She was raised as a Mormon in Salt Lake City, Utah (she discusses her virginity in an interview with CosmoGirl Magazine). Although, despite her image as a good girl, she received some amusing attention from Access Hollywood’s Billy Bush for her recent bikini photo shoot for Shape Magazine. 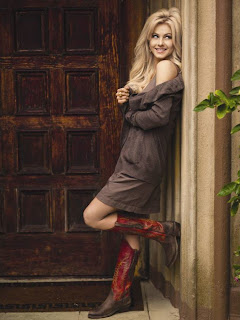 But there’s more to Julianne than just her dance moves and her incredible good looks. In fact, if you haven’t already heard, she’s also a country singer. She just released her debut single, “That Song in My Head” off her self-titled album, which will be released on May 20, 2008. For tour information, music, pictures and more, please visit: JulianneHough.com. And be sure to look for Julianne this summer when she tours with Brad Paisley.

As the two-night Dancing with the Stars premiere is set to get underway, Julianne’s charismatic personality and outstanding choreography is likely to make her more than just an idol on the dance floor. Of course this season she is not likely to repeat a victory on the show with partner Adam Carolla, but even if she does not go far in the competition, her career in the spotlight is far from over.

Photographs: Courtesy of Ondrea Barbe
(Special Thanks to Universal Music Group)
To request permission to use excerpts from this blog or to quote on television or in print, please email publicity@manhattanpublicrelations.org.