Jordan Pruitt stood in front of me with the microphone in her hand. The sound engineer readied the track, as the crowd waited in anticipation for her to take the stage.

With a small notepad and pen in my hand and a camera slung over my shoulder, I was ready to hear her music for the first time.

They say you only have one chance to make a good first impression, and as Jordan Pruitt stood next to me backstage, sipping from her Dunkin’ Donuts cup (following a brief wardrobe change and sound check) I didn’t know what to expect. Sure, I knew she was the opening act for the incomparable Demi Lovato (who is currently the only recording artist to receive two, 5-Star album reviews from StayFamous.Net), but was she able to headline a show and entertain an audience of her own? 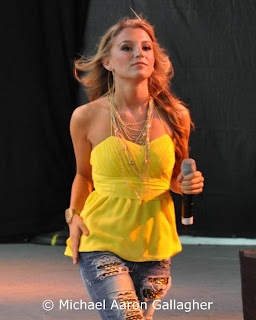 As if she was suddenly ready to put an end to my speculation, the music began and standing only inches away from me, Jordan belted out the opening of her song “Permission to Fly” and confidently trotted out on stage at the 2009 Great New York State Fair in Syracuse, NY.

I was instantly blown away by her vocal ability and her full, crisp sound. She may be small, but there is no question, Pruitt’s voice packs a powerful punch. Jordan may not have been intending to serenade me with a momentary up-close recital (in fact, she didn’t even know I was there), but she couldn’t have possibly made a better first impression.

About the Artist
From Logansville, Georgia, 18 year-old singer-songwriter Jordan Pruitt is no stranger to the concert stage. Having worked with Keith Thomas of Levosia Entertainment, who helped sign her to Hollywood Records and is responsible for developing Radio Disney star Savannah Outen (recently photographed by StayFamous.Net at her Harborfest concert), Pruitt has toured with Vanessa Hudgens, Drake Bell, Plain White T’s (recently photographed by StayFamous.Net at the 1,000 Islands Music Festival) and the Jonas Brothers.

As a marketing powerhouse, she has become the face of several major national brands and continues to be a favorite on the Disney Channel and Radio Disney networks. Her entertainment company, Jordan Pruitt Enterprises, LLC is also responsible for helping to develop up-and-coming young country music singer Jessie Kirk, who opened for Pruitt at her New York State Fair concert.

The Show
As quickly as she had begun singing, the music stopped. The crowd began to scatter and run for the cover of nearby buildings, as the skies opened up and rain soaked the audience. The concert was over. It had been cancelled after just two and a half songs. According to her band, they were scheduled to play as many as 11 songs that afternoon.

For the few fans who congregated in the rain near the stage after her abbreviated show, Pruitt kindly signed autographs and posed for pictures, apologizing to them for having to cancel.

As I ducked for cover from the rain, I couldn’t help but feel disappointed. Remarkably, Jordan Pruitt had succeeded in proving she deserved the spotlight, but I felt like I had missed out on an incredible show. I wondered if I would have another opportunity to cover one of her concerts.

In the end, I wasn’t able to write the article that she may have deserved, but the moral of the story is – either way, Jordan Pruitt will leave you wanting to hear more. For information on her album, visit www.myspace.com/jordanpruitt, where you can listen to her songs, find out about upcoming concert dates and add her as a friend.