The “Ivory Tower Half Hour” on WCNY-TV is a rare example of how effective collaboration can lead to innovation. Since 2002, the weekly, 30-minute broadcast has treated audiences to a thoughtful analysis of the important Central New York, regional, and national news stories of the week, presented by some of the top local professors. On Sept. 19, the program offered viewers a rare opportunity to see a taping of the show in front of a live studio audience. 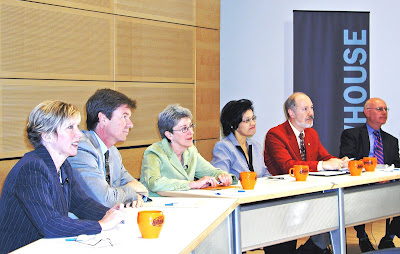 The event, which was open to the public, took place in the Joyce Hergenhan Auditorium at Syracuse University’s S.I. Newhouse III Building. Following the taping, panelists responded to questions from the audience on topics, ranging from the obstacles prohibiting an effective three-party political system from operating in the United States, to gender issues surrounding the upcoming Presidential election.

The “Ivory Tower Half Hour” is more than a local talk-show, it is a blend of current events, public policy debates, and a discussion of everything from sports and entertainment to the role of the media in shaping public perception. 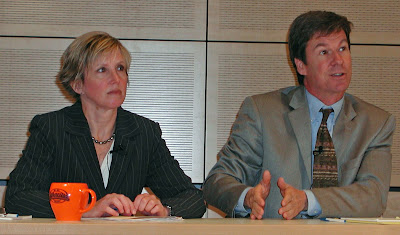 Lisa Dolak (left) and Tim Byrnes (right) answer questions from the audience during the taping of the show.

One of the highlights of each episode is the segment in which panelists assign As and Fs to current newsmakers, sharing stories about people who deserve special recognition or public scolding for their behavior. They also challenge their audience to participate in the dialogue, even occasionally reading letters from viewers on the air.

Kristi Anderson responds to a question from the audience at Newhouse III on the Syracuse University campus.

What sets the “Ivory Tower Half Hour” apart from other news talk shows is the combination of insight, experience, and expert analysis from the panelists, and the professional, courteous way they discuss their diverse perspectives with each other. It is informative, entertaining, and regardless of whether audiences agree with their individual opinions or not, the topics presented each week, stir a lively debate over issues that matter to the public.

According to moderator and host David Rubin, the “Ivory Tower Half Hour” is a part of an “interconnect” throughout New York State that allows other public television stations to air the program. Through their collaboration, the “Ivory Tower” continues to share the best that Central New York educational institutions have to offer with audiences across New York State.

For more information
The “Ivory Tower Half Hour” airs every Friday at 8 p.m. on WCNY (PBS). You can also watch the show online anytime at www.wcny.org.