It may be his first feature film, but director Geo Santini proves he can piece together an edgy, dramatic thriller with style.

Set in Los Angeles, “Hotel California” stars Erik Palladino in an ultra-cool performance that leaves you wanting a sequel. With a cast that includes Tyson Beckford, Simon Rex and Tatyana Ali, the movie centers around the reunion of three former partners in a world of drugs, crime and violence, and questions where their loyalties now lie.

Conradt, who wrote the screenplay for “Hotel California” explained what makes the story so compelling.

“All the characters are liars in this film. They all lie about something. In movies, the audience assumes that whatever a character says is that character’s reality, but we wanted to make them all unreliable on some level,” Conradt said. “The tough part of writing this film was to keep escalating the stakes without ever giving away the truth about where everyones’ loyalties lied until the very end. No one could show the cards they were holding, but every exchange gets you a little closer to the truth.”

I recently asked Santini about his vision for the movie. From an actor’s real-life run in with the police during filming (near Sunset Blvd.), to his upcoming collaborations with screenwriter Christine Conradt, he revealed his attention to detail, his desire to work with actors like Daniel Day-Lewis, Gary Oldman, Meryl Streep, Christoph Waltz – and much more.


Michael Aaron Gallagher: “Where did the idea for the plot of ‘Hotel California’ originate?”

Geo Santini: “Oddly enough I had just moved to LA from NY. I was on the set of ‘Herby Fully Loaded’ and met a guy who wanted to produce this idea he had. We exchanged numbers and we met up at a Starbucks. He gave me a 12-page script a week later. We decided to make it into a short. After producing the short we decided that this might be cool as a feature, and we started the ball on rolling on the feature film.”

Michael Aaron Gallagher: “Why did you decide to use such heavily saturated colors for the look of the film?”

Geo Santini: “Going into ‘Hotel’ I knew that one of the things that was going to make this story more interesting was not only how it was told but how it was presented. The colors are to express the mood of the scene – tones of the character. The black and white was in place to make certain details pop or accent certain elements to the audience.”

“I remember when I was a kid at the age of 5, I loved to watch ‘Miami Vice’ for the colors, I didn’t understand anything about the drugs or violence but the pretty imagery drew me in. Once I could understand the story, it just grew my appreciation for the series. I also thought it was a fun way to see such a dark and violent story.”

Michael Aaron Gallagher: “In your online biography it says that ‘Hotel California’ was originally a short that became a feature. Did you use the same cast or were there any differences between the two projects?” 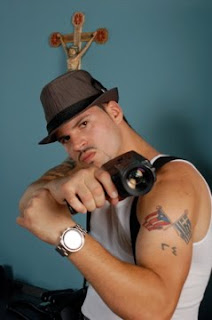 Geo Santini: “Yes, of course there’s night and day differences between the short and the actual film. The short was just the concept, the idea of three guys in a room and each having a different agenda, and seeing who actually would make it out. Now once we received financing for the picture, we started casting the film, but everyone who was involved in making the short had a hand in helping it transition to a feature film.”

Michael Aaron Gallagher: “I read that some of the crew members were mistakenly placed under arrest during the production. Tell me how that situation came about and how you resolved it?”

Geo Santini: “Everyone thought it was a publicity stunt but it was actually real. Funny enough it was one of our biggest days for equipment and crew, we had shut down Wilcox off of Sunset Blvd., we had huge 18Ks set up on the streets, a huge crane and over a hundred crew and cast members total. Eric Palladino (Troy) was walking down the street. It was one of the last shots of the day, and I asked him as he walked to tuck the gun over his shirt. I wanted him to turn the corner, so he actually had to walk off set. So as soon as he turns the corner a few cop cars drive by and see a gun in his back. They rush the set and place him and the second ad in cuffs. Our set police resolved the situation.”

Michael Aaron Gallagher: “Do you have a favorite line or scene in the movie?”

Geo Santini: “My favorite scene of the movie is a scene I had to write in like ten minutes. It’s the scene where Dimitri came to see Sal, and he shares his war story. I love the performance and how such a simple scene of dialogue can keep you tense for five minutes straight. I love the framing and the tone.”

Michael Aaron Gallagher: “I noticed that music plays an important part in setting the tone in some of the scenes. Did your background in music videos help at all in the way you envisioned the cinematography?”

Geo Santini: “Music was key. I had picked the music for the movie before I shot a frame. One of the guys I worked with introduced me to Shotgun Radio, once I heard their stuff, I had to put it in ‘Hotel.’ It captured the mood I was going for.”

Michael Aaron Gallagher: “’Hotel California’ was your feature film debut as a director. Looking back on it, are you happy with the way the final product turned out?”

Geo Santini: “Honestly, I actually dig the film, but I definitely would do certain things different. I feel ‘Hotel’ was an experience that helped me grow as an artist…I hope to get better with each project and each film I do.”

Michael Aaron Gallagher: “How would you describe yourself as a director? Are there any adjectives that particularly characterize your work and how you want to be seen in the industry?”

Geo Santini: “Edgy. Stylistic. Sophisticated. I just wanted to be respected in the work I do. I want to be known for great attention to the detail. I want my films to be an experience that moves people whether it be sad, angry, happy. I want my films to strike a cord.”