Carrie Manolakos is best known for her role as Sophie Sheridan in the U.S. tour of the Broadway Musical Mamma Mia. Her outstanding talent and personality have made her an audience favorite. I had a chance to ask Carrie some questions about her career and her life in New York City, and this is what she had to say: 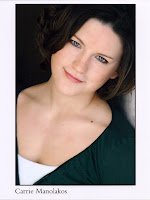 Michael Aaron Gallagher: “What was it like traveling the country with the Mamma Mia cast?”

Carrie Manolakos: “Traveling around the country was amazing and I wouldn’t trade it for anything in the world. I got to see most of the U.S., and many cities in Canada and Mexico. I met different people along the way, and learned how to constantly adjust to new surroundings. The cast and crew were an unbelievable group of people, and they became like a family to me.”

Michael Aaron Gallagher: “If you had a choice would you rather tour the country, or do the same show on Broadway?”

Carrie Manolakos: “I would never give up the experience of going on tour. Although it was exhausting and frustrating at times, it enriched my life in so many ways. At this point in my career, I would like to spend some time in New York, and stay settled here. It’s nice to have a home and a bed that’s your own, instead of staying in hotels each week.”

Michael Aaron Gallagher: “Out of all the musicals you’ve done, who was your favorite character to play?”

Carrie Manolakos: “I’m not sure of my favorite role, but Sophie Sheridan in Mamma Mia is high up on the list.”

Michael Aaron Gallagher: “Would you ever consider doing television or movies?

Carrie Manolakos: “I have definitely considered TV and Film, although most of my background is in theatre and singing. It is a part of performing that I don’t have much experience in, but I am anxious to try.”

Michael Aaron Gallagher: “Are there any plans to launch a web site?”

Carrie Manolakos: “At this point, I have a website in the works. I am waiting to get some more music and video clips to put up. The website is CarrieManolakos.com. There are currently a couple of video clips on YouTube and there will be more to come.”

Michael Aaron Gallagher: “What is your dream role (in theater) and who would you want to work with?”

Carrie Manolakos: “Some of the roles I would like to play at the moment are Elphaba in Wicked, Millie in Millie, Olive in Spelling Bee and Eponine in Les Misérables. Some of the Directors that I would love to work with are Joe Mantello, Jason Moore, and Michael Greif. The list goes on, but these are just a few.”

Michael Aaron Gallagher: “If you could have a career like any other singer/actress who would you want to be like?”

Michael Aaron Gallagher: “If you could have lunch with anyone, who would you want to sit down and chat with?”

Michael Aaron Gallagher: “What’s the hardest part of being an actress in New York City?”
Carrie Manolakos: “The hardest part about being an actress in NYC is constant change. That part is also incredibly exciting. More often than not an actor doesn’t know where they will be in the next 6 months or year. With every project I meet new, inspiring people. With auditions and performances there are so many emotional highs and lows. But New York City is where the best performers live, and it’s exciting to be challenged and inspired every day by the people who live in this city.”

Carrie Manolakos: “Right now, I am working on a few new projects. I have recently been doing recordings for some new musicals, and I have upcoming readings for new shows. I am also working on a demo CD, that I hope will be completed in the next few months. I have started writing music again, and hope to pursue that in addition to theatre.”

Photo: Courtesy of Carrie Manolakos
To request permission to use excerpts from this blog or to quote on television or in print, please email publicity@manhattanpublicrelations.org.