If there is one way to describe Jeffrey Mayer’s new pop-culture, fashion exhibition, “Marie Antoinette: Styling the 18th Century Superstar,” it is sheer perfection. Abandon everything you thought you knew about going to a museum. Jeffrey Mayer just put the glamour and excitement back into visiting an art gallery with his modern view of the French icon, which has all the thrills of shopping on the Avenue des Champs-Élysées, without the royal price tags. From Chanel and Balenciaga to Valentino and Yves Saint Laurent, the “Marie Antoinette” display feels like stepping into the pages of Vogue.

On Sept. 19, Mayer held an opening night lecture in the Hosmer Auditorium to present his new project to a full audience at the Everson Museum of Art in Syracuse. The exhibition, which officially opened on Sept. 20th, and will be on view until Jan. 11, blends classic, 18th Century imagery with a contemporary, haute couture twist.

Jeffrey Mayer, who is the exhibit’s curator and designer, grew up in Pendleton, Oregon. Even as a youngster he had a love for fashion, which eventually blossomed into a passion for design. As Associate Professor of Fashion History and Design at Syracuse University, Mayer struggled to capture the attention of his students with some of his earlier displays, until, one day, he used their fascination with the Sofia Coppola film, “Marie Antoinette” (starring Kirsten Dunst), as the inspiration to create a revolutionary new exhibition. That presentation eventually expanded from its original home at Lyman Hall on the Syracuse University campus, to its new place in the White Cube Gallery at the Everson Museum of Art.

With the goal of capturing “the effect of Marie Antoinette,” Mayer began to re-envision his wardrobe collection to reflect a fresh, new idea of the Queen. “I’m going to look at Marie Antoinette,” Mayer said, “and think, who in contemporary terms, might evoke that look…” From there he chose pieces from designers like Christian Dior, Dolce & Gabbana, and Bill Blass to recreate the legendary excesses of one of France’s most lavishly outfitted monarchs. 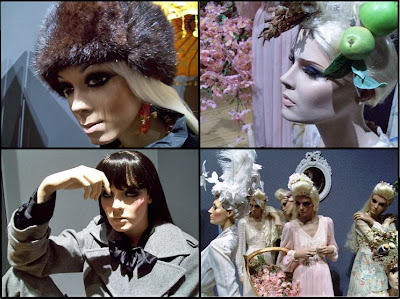 “Marie Antoinette” is a visual feast for the eye, reinterpreting the classical impression of Antoinette and blending it with the luxurious fabrics and accessories from some of today’s top designers. Each individual grouping of mannequins, from renowned manufacturers Adel Rootstein and Patina V, creates a scene, reflecting the major themes of the exhibit, which are: 1) Fantasy, 2) Luxury, and 3) Exoticism. The mannequins themselves are modeled after such famous faces as Joanna Lumley, Mel Martin, Pat Cleveland, Tina Chow, and Princess Anne of Denmark. With dresses once worn by such well-known figures as Ivonna Trump and Lauren Bacall, Mayer creates a lifelike display of high society, complete with all the grace and elegance of royalty, as if each scene is a fine portrait come to life. The rich color palette, the haughty expressions and model-esque poses of the mannequins, the ornate decorations, the delicate clothing, the dazzling shoes, and the divine accessories (including exquisite jewelry by designer Kate Jung) draw your eye to the regal extravagance.

With his new exhibition, “Marie Antoinette: Styling the 18th Century Superstar,” Jeffrey Mayer is proving he is a fashion superstar. It is artistic, daring, and original, a must-see for every fashionista looking to glam up her wardrobe with a little panache from an 18th Century muse. Mayer not only challenges the viewer to see fashion as an artistic medium, but he also sets the standard for commercial clothing displays and three-dimensional art exhibits to follow. The stunning, overall attention to detail, the quality and precision of the costume designs, and the flawless arrangement of carefully-styled mannequins, tells a story that is both intriguing and breathtaking.

“Marie Antoinette: Styling the 18th Century Superstar” is on view Sept. 20 to Jan. 11, 2009 at the Everson Museum of Art, Syracuse. Jeffrey Mayer’s book with photographs of the collection is available through the Everson Museum’s gift shop. For more information about museum hours, visit Everson.org or call 474-6064.

To request permission to use excerpts or to quote StayFamous.Net on television or in print please contact Michael Aaron Gallagher.

« "Ivory Tower Half Hour" Showcases Intellectual Partnership » The Status: ‘So This is Progress’ Album Review