In what could have been a scene right out of Warner Premiere’s “Another Cinderella Story,” Drew Seeley, who starred opposite teen sensation Selena Gomez as the fictional pop singer Joey Parker, made dozens of girls swoon as he took the stage at the 2009 Great New York State Fair in Syracuse, NY. 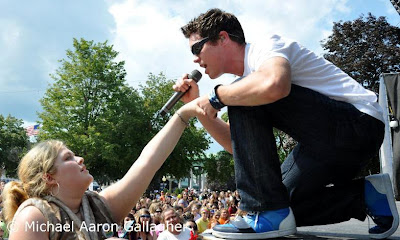 Drew Seeley serenades a fan during his recent concert.
Fans arrived early to reserve seats for the free afternoon concert in Chevrolet Court. Some audience members carried signs and wore hand decorated t-shirts, while others held out roses for the pop star.

Singing a mix of songs from “High School Musical,” including “Get’cha Head in the Game” and “Breaking Free,” a duet with special guest Tiffany Giardina, Seeley performed without a band or backup dancers.

At one point, he briefly jumped down off the stage to sing one of his songs among the crowd, drawing a swarm of enthusiastic girls closer to the stage. 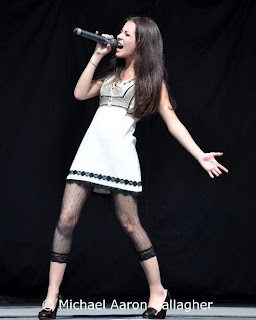 Giardina also entertained the audience during the show with, “Hurry Up and Save Me” and “No Average Angel” from the “Another Cinderella Story” soundtrack, while Seeley made a brief wardrobe change. When he returned to the stage, wearing a black hat (which he later tossed into the crowd), he mimicked a familiar line from his movie.

And with all the boyish charm of Joey Parker, Seeley offered his telephone number to the audience and explained that he tries to listen to as many of the messages that he receives as possible. By the time he thanked the crowd for coming out, a line had already formed at the nearby merchandise tent.

The announcement that Drew would be available for 10 minutes for anyone who wanted to meet him, heralded an enthusiastic stampede of fans, as more than a hundred people lined up, stretching the length of Chevrolet Court. He may not have drawn a crowd as large as Jordan Pruitt or Drake Bell, but one thing is for sure, Drew Seeley is still a teen heartthrob, who can act, dance and sing. 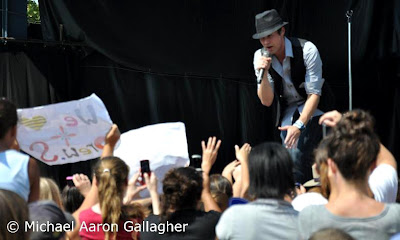 “Joey Parker” sings songs from the soundtrack
of Disney’s “Another Cinderella Story.”
Seeley, who stars in the Broadway production of “The Little Mermaid” and the new horror film “The Shortcut” (Leomax Entertainment) is set to release a Web series in October called, “I Kissed a Vampire.” His song “You Can Do Magic” is available on the “Wizards of Waverly Place” soundtrack, and his new song “Her Voice” will be featured on the upcoming “Disney Mania 7” CD.

For more information on Drew Seeley visit myspace.com/drewseeley, where you can listen to his music and add him as a friend. To learn more about the Great New York State Fair’s concert series visit www.nysfair.org.