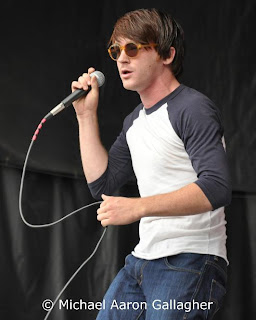 By the time Drake Bell took the Chevy Court stage at the 2009 Great New York State Fair in Syracuse, NY, many in the crowd had already been treated to a taste of the show to come. Looking a bit like Harry Potter with disheveled bangs and round glasses, Bell displayed his good-natured sense of humor earlier in the afternoon when he grabbed the microphone and made an amusing introduction.

“Ladies and gentlemen,” Bell said with the customary pause. “Welcome to our sound check.” He then followed with, “This is not the show, so if you’re really bored, I’m sorry.”

His free afternoon concert drew a standing-room-only crowd that included fans of all ages, as many people gathered hours before the start time to reserve seats. During the performance, New York State Troopers were on hand, maintaining order and keeping the aisles clear to ensure everyone’s safety.

When the band concluded their warm up, Bell again kidded the audience, pretending as if his performance was over saying, “Thank you all for showing up. It was amazing playing for you guys. Goodnight!”

,” as well as movie roles in “College

” (1996), Bell is no stranger to comedy. Perhaps best known for his regular roles on “The Amanda Show” (starring the always amusing Amanda Bynes) and as Drake Parker on the Nickelodeon show “Drake & Josh,” he has also built a successful music career, set to release his third album soon.

For more information on Drake Bell’s music, visit his official MySpace page (myspace.com/drakebellonline), where you can listen to his music and add him as a friend.