‘Cash’ Documentary, Worth Every Penny

“‘Cash’ Documentary, Worth Every Penny”
by Michael Aaron Gallagher 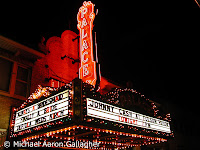 You don’t have to be a fan of country music to appreciate the legendary icon, Johnny Cash. The new documentary “Johnny Cash at Folsom Prison,” written by the Director of the Communication Program at Le Moyne College Michael Streissguth and directed by award-winning documentary filmmaker Bestor Cram is like opening a time capsule from January 13, 1968. The film holds the hauntingly stirring sounds of the original prison recordings. It captures the rich energy of the period, revives the unique humor and wit of Cash, and preserves the kindred spirit he shared with his audience.

According to the director, the idea for the film began with Streissguth, who is also the author of “Johnny Cash at Folsom Prison: The Making of a Masterpiece” and “Johnny Cash: The Biography.” The two met in the summer of 2005, while attending a Cash conference. From the initial concept and search for funding, to its debut on the big screen in 2008, the project took three years to complete.

Both filmmakers recently presented a special screening of “Johnny Cash at Folsom Prison” to a crowd at the Palace Theater in Eastwood, NY as a pre-festival event in partnership with the Syracuse International Film Festival. Following the show, they discussed the filmmaking process. According to Cram, the challenge in making the documentary was that although Johnny Cash performed two concerts at Folsom Prison, “there is no motion picture footage.” Yet even without a video recording, Cash’s own narration, his songs, and the delicate array of still photographs, animation (created by four separate artists), and the contributions of those interviewed, including Cash photographer Jim Marshall, former Folsom Prison inmate Millard Dedmond, and country music stars Merle Haggard, Marshall Grant, Marty Stuart, and Rosanne Cash make this a one-of-a-kind, tribute to a moment that will forever define his musical legacy. 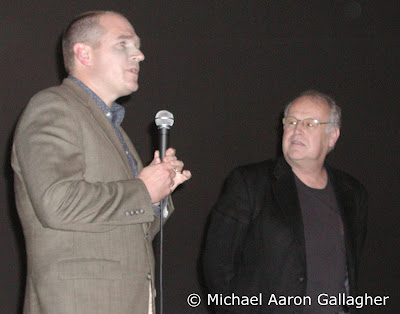 Bestor Cram of the Northern Lights Production Company in Boston, Mass. is perhaps best known for his directorial work on the award-winning documentary, “Unfinished Symphony: Democracy and Dissent,” which was nominated for an award at the Sundance Film Festival in 2001. During his presentation at the Palace Theater he described shooting the new Cash documentary, “Part of the process includes making application to the State of California to be able to get into Folsom Prison. We were denied twice. It was the third time that we were welcomed.”

“When we went to visit Folsom,” Cram said, “and I think this is true in many different American prisons, the first thing you have to do before you go through the prison walls is to sign an affidavit that says you understand there is no negotiation if you are taken hostage.”

Writer Michael Streissguth clarified some of the tensions that existed during the historic concert and in the prison during that era and beyond. “Interestingly enough, Sammy Davis Jr. played Folsom in 1961.” Streissguth said, “The prison officials were constantly looking for sources of entertainment to divert the prisoners, to take their minds off of the monotony, to diffuse tensions that may have been afoot. In fact, just a week or so before Cash visited in 1968, two or three prisoners had been taken hostage by other prisoners in a dispute. So there was some tension when Cash went into the prison.”

Still, even with the dangers that existed, the concert recorded at Folsom prison remains a defining moment in country music history. The documentary “Johnny Cash at Folsom Prison” goes beyond the event that spawned a classic record, to tell a story that is as interesting and complex as the myth of Cash himself. The animated sequences that accompany songs like, “The Wall,” “I Got Stripes” and “25 Minutes to Go” bring a new dimension to Cash’s music, and are as good as any contemporary MTV music video.

If you thought the complete story of Johnny Cash has already been told, “Johnny Cash at Folsom Prison” will undoubtedly enrich your understanding of one of the most intriguing chapters of his long and storied career.

“Johnny Cash at Folsom Prison” will tour the film festival circuit, making its European debut at a premiere in Amsterdam. The documentary is currently available in a deluxe box set, including two CDs and the DVD from Columbia/Legacy music. For more information on the film visit: http://www.nlprod.com/.

« "Our Movie Houses" Delights Readers » "There for Tomorrow" Exclusive Interview with StayFamous.Net