“Irreverently funny, clever and original, the new animated comedy series ‘Archer’ will keep you laughing long into the night.” – StayFamous.Net 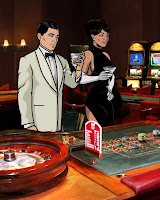 On Jan. 14, the animated comedy series “Archer” premiered on FX with two back-to-back episodes starting at 10 p.m. Make no mistake, this is not your typical comic book style cartoon. It is sophisticated, witty and wildly entertaining.

“Archer” is about an international spy named Sterling Archer, whose mother runs the International Secret Intelligence Service. With a cast that includes H. Jon Benjamin, Aisha Tyler, Chris Parnell, and Judy Greer, the show is unpredictable and at times even a little risque.

For many, “Archer’s” edgy subject matter and mature themes will no doubt raise a few eyebrows and perhaps even offend some audiences. But for the show’s creator, Adam Reed, finding the line between what’s funny and what is over-the-top is part of the process of creating a show that is truly one-of-a-kind and engaging.

Achieving a comedy series that people will talk about also means pushing the boundaries on television, something that actress and comedian Aisha Tyler understands. “We haven’t done our job if somebody doesn’t start writing a letter,” said Tyler, “I’m sure there will be backlash from everyone.”

“I believe in the concept of comedy as an adult art form,” said Tyler. “The juxtaposition of this really beautifully animated show, which most people do think of as more of a young art form, being contrasted with all these incredibly inappropriate things that the characters are doing or saying to me is just delicious.”

The creative material, quick pace and comedic timing are only part of the show’s allure. It’s rich, vibrant colors and attractive characters and settings makes it visually appealing to watch as well.

“We record the voices first and animate to that, so our process is all centered around the voice actor’s performance,” said Reed. “Then we put the voice track against the storyboard cut and we don’t animate anything until the end.”

“It’s got a realistic feel, I think, with the backgrounds,” said Reed. “We actually take photographs of real models and dress them in vintage clothes and then take hundreds of photographs of them, and our character illustrators then use those as a reference.”