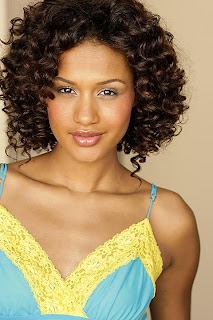 When “America’s Next Top Model” finalist Mercedes Yvette signed up for the reality show, she was unaware of the public journey she would endure with a disease that is still not fully understood.

Mercedes was diagnosed at age 21 with lupus, a chronic, autoimmune disease, which damages the organs and tissues of the entire body. Now 28, she said the television show helped propel her career, enabling her to promote awareness and rally support in the fight for a cure.

This May, the actress/model and now Lupus Foundation of America spokesperson, offers advice to people across the country, encouraging them to become involved in supporting research, clinical trials and funding to fight the disease.

When Mercedes became a contestant on the reality show hosted by Tyra Banks she was newly diagnosed and still trying to understand the disease, she said.

After the struggle with her symptoms became public, she received an outpouring of support from those who heard her story.

“I feel like I was the pioneer of someone being diagnosed with lupus and going through the symptoms on national television,” she said. “Because no one really talked about it before. You never see it on TV or you didn’t really hear about it until my hair was falling out on TV and I was explaining what the disease was.”

Despite the challenges she faces, at times struggling to get out of bed or dealing with joint pain, sensitivity to sunlight and fatigue, she tries to inspire others with the disease, by overcoming the obstacles she faces and continuing to work.

“You may have lupus but don’t let lupus define who you are,” she said.

Since leaving the Top Model house, she appeared in an episode of the UPN television comedy “One on One,” and on the CW’s “All of Us” in 2005. She has also been featured in several television commercials for companies like Chili’s Restaurant, Volkswagen and Ross Dress For Less.

On May 4, New York State Governor David A. Paterson proclaimed the month of May “Lupus Awareness Month.” A lack of publicity and understanding about the disease is something many suffering with lupus routinely face and the disease still does not receive the attention and funding it deserves, Mercedes said.

Lupus affects approximately 5 million people worldwide, including 105,400 New Yorkers, according to the state.

“We’re still getting treated with cancer drugs when it’s not cancer that we have,” she said. She added that lupus is one of the most difficult diseases to diagnose because many of its symptoms can easily be confused with other illnesses.

“It doesn’t look devastating on the outside but it’s extremely debilitating on the inside. It’s deadly and it’s killing a lot of people,” she said.

The most significant thing that can be done in the fight against lupus is to become educated about the disease and share that knowledge with others. Because there is no known cure for lupus, it is especially important to spread awareness so people can be diagnosed early, improving their treatment and survival rate.

“We’re asking everyone to band together and commit to one thing to raise awareness of lupus, because that’s the foundation – to raise awareness,” she said. “I want the public to know I’m not Superwomen. I do have this disease. It is up and down – medicine varies. At the same time, I keep a positive outlook. I truly believe I will cure myself of lupus one day or that there will be a drug that will cure me before I die. That’s why this cause means so much to me.”

For more information about lupus visit http://www.lupus.org/. To ask a question or get a referral for additional resources, call the Health Educator Line at 1-800-558-0121.